Wireless networks allow computers and other Internet-enabled devices to connect to the Internet without being wired directly to a modem or router. They transmit signals across radio waves instead. Wireless networks make communication services available almost anywhere, without the need for wired connections.

Computer networks allow multiple computers to access information stored in other locations and to use common devices, such as printers and file servers. Setting up a traditional computer network requires cables, distributors, routers, and internal and external network cards.

As computers became smaller and therefore more mobile, cables and wires presented challenges. The development of wireless connectivity made it more convenient to use laptops, tablets, and other mobile devices in more places. Wireless networks provide the same connectivity and access as traditional networks without the need for physical cables.

Most wireless networks transmit signals using radio waves, the lowest-frequency waves in the electromagnetic spectrum. A computer sends data across a wireless network through nodes, which are all the hubs, switches, and devices connected to the network. The data are translated into a radio signal and transmitted to the wireless router. The router then sends the information to the Internet through an Ethernet cable. Multiple devices can access the same wireless router to connect to the Internet.

Broadly speaking, the different types of wireless networks can be divided into four main categories, based on range and how they transmit information.

A personal area network (PAN) covers the shortest range. PANs are typically used by one person to transmit information between two or more devices. The network is generated by one device, such as a cell phone. Any device within range of that device can then communicate with it, or with any other device within its range. The range of a wireless PAN (WPAN) is generally no more than a few meters.

The next-largest type of network is a local area network (LAN). The term was initially used to refer to devices within a limited area, such as a single building, that are connected via cables to a central access point, such as a modem. A wireless LAN (WLAN) works much the same way. Instead of being connected to the individual devices by cables, however, the access point connects to a router that generates a wireless network. This network is omnidirectional, meaning that it is equally strong in all directions. As a result, the signal is weaker, and thus has a shorter range, than if it were focused in one direction.

A wireless wide area network (WWAN) can cover a range of several miles. To accomplish this, WWANs use directional antennas and typically transmit signals via microwaves. Microwaves have a higher frequency than radio waves, although there is some overlap. While microwaves can travel farther, they cannot penetrate obstacles as well as radio waves. Thus, to use the network, a device must have a direct line of sight to the antenna or be connected to another node that does. A WWAN may be either point-to-point (P2P) or point-to-multipoint (P2MP). P2P, the simplest type, connects one node to another. P2MP connects multiple nodes to one central access point. 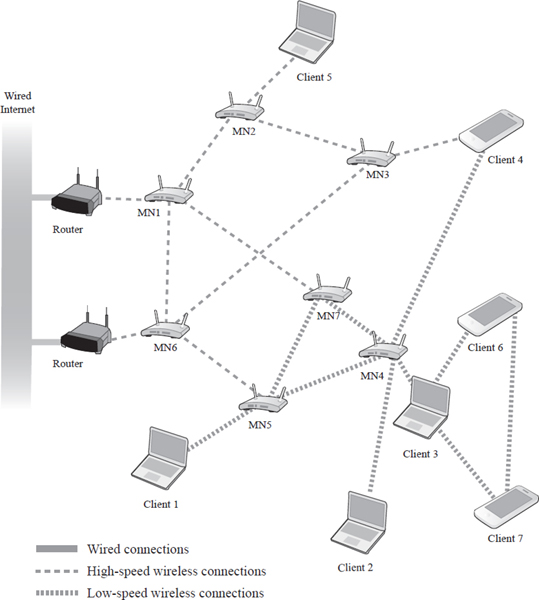 Wireless networks allow multiple clients or terminals to connect with other terminals via wireless pathways. Depending on the type of router, the connection may be high speed or low speed.
EBSCO illustration.
PROS AND CONS OF WIRELESS

WLANs gained popularity over regular LANs because of their convenience and cost savings. In fact, wireless networks became so prolific that Apple phased out Ethernet connection ports on its MacBook laptops. By investing in wireless networking hardware, businesses can avoid the trouble and expense of installing cables throughout a building. They can quickly expand the network when needed. Consumers can easily set up home networks for use with laptops, tablets, and smartphones. Users can be more productive by accessing the Internet wherever they are.

However, wireless networks have drawbacks as well. Their smaller range makes additional equipment, such as repeaters, necessary for larger buildings. In addition, radio waves are prone to interference, making reliability an issue. Security is also a concern. Since data are transmitted through the air, wireless networks involve greater risk.

Wireless networks have allowed more people around the world to access the Internet from more locations than ever. In business, wireless networks enable companies to operate with more speed, flexibility, and connection. In health care, they allow physicians to consult with faraway specialists or to check in with patients in rural areas. For individuals, wireless networks bring friends and families closer, enabling them to keep in more frequent contact and allow users to stream entertainment or download books while on the go. News is delivered as it happens. People immediately share their reactions, while families and friends can check on those affected.

Without wireless technology, there would be no smartphones and no texting, and there would be less access to social media. Social media enables people all over the world to express themselves, whether for personal or political reasons. From young voters in the United States to the political uprisings throughout the Middle East during the Arab Spring of 2011, social media has become an important force for political awareness and connection over shared interests.

THE EVOLUTION OF WIRELESS NETWORKS

Businesses are increasingly moving to cloud-based networks, which eliminate on-site hardware and move all infrastructure, administration, and processes to remote servers. Communities are creating mesh networks with their own infrastructure to share resources and connect through their mobile devices. Such mesh networks provide more reliable communication and connection during emergencies or natural disasters. At home, consumers are taking advantage of new technology to make wireless connection to the Internet easier and more convenient. It is clear that the proliferation of wireless networks has changed the way the world learns, communicates, and conducts business. As the cost of wireless technology decreases, the benefits will spread even further.