Web design refers to the visual design, layout, and coding of a website. It is a subset of the larger discipline of web development. Web designers are responsible for building effective websites that effectively communicate ideas and provide users with the information they need. Web design programming tools help designers create attractive, well-organized websites.

FROM EARLY HTML TO RESPONSIVE DESIGN

The Internet has come a long way from the time when black computer screens displayed plain text and a blinking cursor. Websites did not exist before 1989, when English physicist Tim Berners-Lee began developing what would soon become the World Wide Web. In the process, he invented hypertext markup language (HTML), which is the code that describes the structure of a website. HTML was extremely simple at first, with fewer than twenty defined tags. However, it soon expanded as users' needs grew.

While HTML is still the backbone of web design, other web markup languages have since been developed to supplement it. JavaScript, introduced in 1995, resolved some of HTML's limitations while increasing interactivity between the site and the user. It became useful for game development, desktop applications, and animated and interactive web functions. The development of JavaScript libraries such as jQuery eliminated the need for developers to create their own libraries, making coding much easier and faster.

Adobe Flash, previously known as Macromedia Flash from 1996 to 2005, also allowed designers to animate web graphics and improve user engagement. However, Flash effects require a great deal of processing power and can take a long time to load, making the technology unsuitable for mobile devices and smartphones.

Cascading Style Sheets (CSS) was introduced in 1998. CSS structures the design separately from the content, which is managed through HTML editors. This removed more limitations for designers, allowing them have greater control over the appearance of websites. 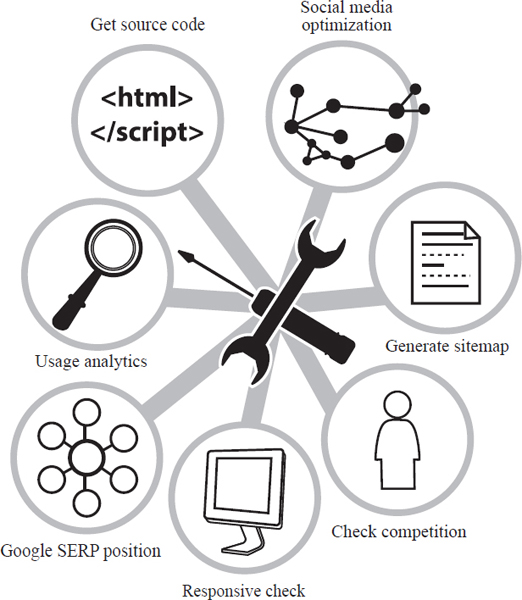 While it is important for websites to look appealing to users, web design includes more than just aesthetics. The designer's role is to make a website as user-friendly as possible. The elements of good web design include:

The Internet is where business is conducted, learning takes place, and connections are made. Businesses and organizations need to have a web presence so their customers can learn about their products and services. The development of web design programming tools has made it possible for professional designers to create attractive and user-friendly websites in much less time, and thus at a lower cost.

Tools such as website builders also allow amateurs with no knowledge of coding to successfully create and launch their own websites without having to learn HTML or CSS. As of 2016, popular cloud-based website builders include Squarespace, Webflow, Weebly, Jimdo, WordPress, and Wix. Each of these tools uses HTML5, the fifth version of the HTML standard. Many feature a variety of predesigned, customizable templates. Templates simplify the entire process by allowing users to plug their content into a preexisting layout. Web designers have already completed both the visible design and the invisible coding that makes everything work. Using a website template may have some disadvantages, such as a limit on customization. However, the ease and cost savings of these tools and templates appeal to many consumers.

Because the Internet is a primarily visual experience, it is important that web designers make websites more accessible for people with impaired vision. Screen-reading programs translate on-screen text and output it to a text-to-speech system or a refreshable braille display. Text-to-speech programs can also improve accessibility for those who are illiterate or learning disabled.

In addition to textual content, screen-reading programs can convey visual elements as well. To facilitate this, web designers should label images and other decorative elements with “alt text”—alternative text that describes these elements for those who cannot see them. This text is also displayed on the screen if the element it describes fails to load.

THE FUTURE OF WEB DESIGN

As web technology advances, web design tools will be developed to take advantage of new possibilities, as seen with wearable technology, cloud computing, and smartphone applications. Programming tools will use artificial intelligence to determine the purpose of content and automatically alter the design for optimal results or for specific users' needs. The way people interact with computers will continue to drastically change, just as it has done from the beginning.