UNIX is a computer operating system originally developed by researchers at Bell Laboratories in 1969. The term is also used to refer to later operating systems based in part on its source code. Several of the original UNIX operating system's features, such as its hierarchical file system and multiuser support, became standard in later systems.

As computer technology rapidly developed in the mid-twentieth century, programmers sought to create means of interfacing with computers and making use of their functions in a more straightforward, intuitive way. Chief among the goals of many programmers was the creation of an operating system (OS). OSs are specialized programs that manage all of computers' processes and functions. Although many different OSs were created over the decades, UNIX proved to be one of the most influential. UNIX inspired numerous later OSs and continues to be used in various forms into the twenty-first century.

Development of the original UNIX OS began in 1969 at Bell Laboratories, a research facility then owned by AT&T. Researchers at Bell had been working on the Multiplexed Information and

Computing Service (Multics) project in collaboration with the Massachusetts Institute of Technology and General Electric. The group had focused on creating systems that allowed multiple users to access a computer at once. After AT&T left the project, Bell programmers Ken Thompson and Dennis Ritchie began work on an OS. Thompson coded the bulk of the system, which consisted of 4,200 lines of code, in the summer of 1969, running it on an outdated PDP-7 computer.

The OS was initially named the Unmultiplexed Information and Computing Service, a play on the name of the Multics project. That name was later shortened to UNIX. Thompson, Ritchie, and their colleagues continued to work on UNIX over the next several years. In 1973 they rewrote the OS in the new programming language C, created by Ritchie. UNIX gained popularity outside of Bell Laboratories in the mid-1970s. It subsequently inspired the creation of many UNIX variants and UNIX-like OSs.

While different editions of UNIX vary, the majority of UNIX OSs have some common essential characteristics. UNIX's kernel is the core of the OS. The kernel is responsible for executing programs, allocating memory, and otherwise running the system. The user interacts with what is known as the “shell.” The shell is an interface that transmits the user's commands to the kernel. The original UNIX shell was a command-line interpreter, a text-based interface into which the user types commands. Over time programmers developed a variety of different shells for UNIX OSs. Some of these shells were graphical user interfaces that enabled the user to operate the computer by interacting with icons and windows. Files saved to a computer running UNIX are stored in a hierarchical file system. This file system used a treelike structure that allowed folders to be saved within folders. 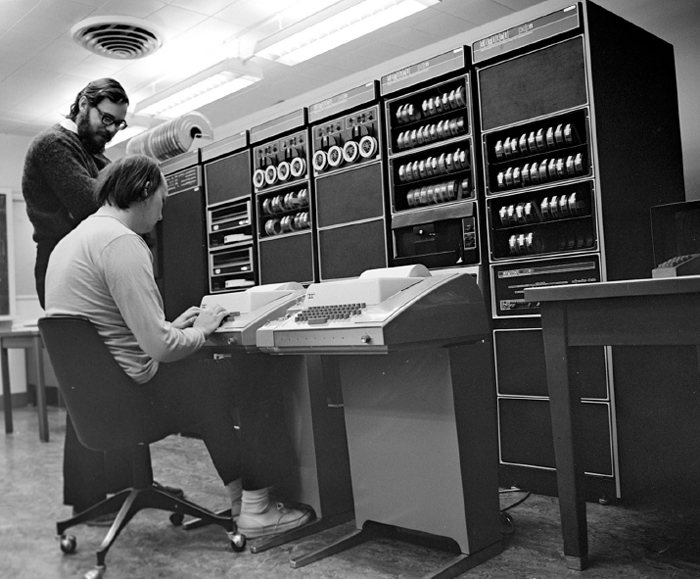 UNIX is also a multitasking system, meaning it can carry out multiple operations at once. One of the first programs designed for UNIX was a text-editing program needed by the employees of Bell Laboratories. Over time, programmers wrote numerous programs compatible with the OS and its later variants, including games, web browsers, and design software.

At the time that UNIX was first developed, AT&T was prohibited from selling products in fields other than telecommunications. The company was therefore unable to sell its researchers' creation. Instead, the company licensed UNIX's source code to various institutions. Programmers at those many institutions rewrote portions of the OS's code, creating UNIX variants that suited their needs. Perhaps the most influential new form of UNIX was the Berkeley Software Distribution variant, developed at the University of California, Berkeley, in the late 1970s.