Software testing ensures that software and applications perform well and meet users' needs. It is intended to expose problems such as defects (often referred to as bugs) or inefficient design. Software testing allows project managers to make informed decisions about moving forward or making changes on a product before releasing it.

THE IMPORTANCE OF SOFTWARE TESTING

Software testing contributes to the development of programs and applications (apps) by detecting gaps between the software's stated requirements and its actual performance. This testing informs software engineers about any poor functionality, missing requirements, errors, and defects. Originally, programmers tested software at the end of the development process. However, the popularity of the graphical user interface (GUI) and other more user-friendly software highlighted the need for more thorough testing. Consumers expect programs to work properly from the start. Therefore, programmers started taking a more careful and systematic approach. Soon, testing throughout the development process became the industry standard.

Manufacturers value software testing because it prevents flawed products from entering the market. Delivering software or launching an application only to have customers discover bugs can have both short- and long-term negative effects. Poorly tested software can lead to declining sales, damage to the company's brand, and possibly even harm to a customer's business operations. In addition, testing can save time and money. It is much easier to correct errors during the development process than after a release. Without testing, manufacturers risk lost opportunities, as users who have a bad experience often switch to a competing product.

“Software testing” is broad term describing a variety of specific methods. Programmers test different aspects of applications, including design, response to inputs, usability, stability, and results. The type of test they choose is based on factors such as the programming language and what they need to learn. 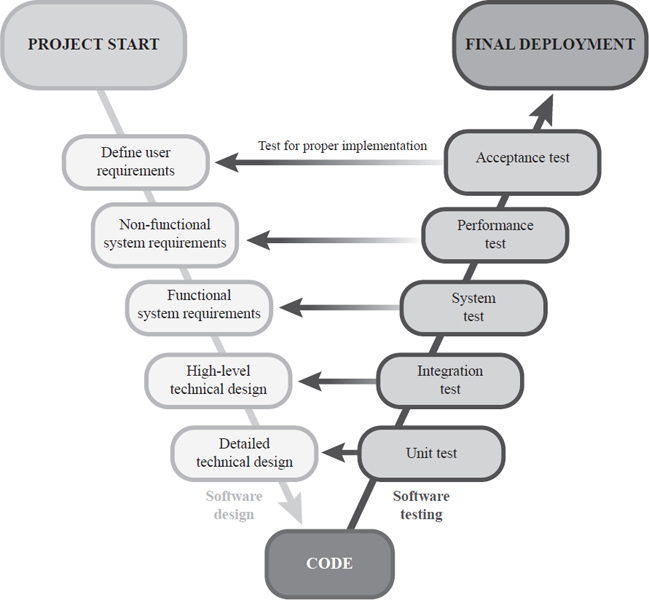 Because the testing process is critical and detail oriented as well as repetitive, tools have been developed to assist in the process. These include:

WHEN TESTING IS INSUFFICIENT

Releasing an app that does not function as expected can cause serious repercussions, even for a respected company. When Apple first introduced the Apple Maps app, users soon discovered that certain cities were mislabeled or had disappeared, familiar landmarks had moved, and satellite images were obscured by clouds. As a result, the company faced ridicule, and Apple's CEO was compelled to issue an apology.

To ensure proper testing and avoid such problems, programmers follow a series of steps, starting with reviewing software specifications and developing a test plan. They also 4 Science Reference Center™ Software Testing write test cases. Test cases are sets of actions that verify program functions. Writing effective test cases can save time and money throughout the testing process. As testing proceeds, bugs are discovered, such as when an expected result is not the actual result. These bugs are logged and assigned to a developer for fixing.

Programmers approach testing from many directions. Some attempt to make an app perform functions it should not do. Others imagine various scenarios, such as what would happen if someone tried to use the software maliciously or with no knowledge of the application. By putting themselves in the place of various users, testers can uncover defects and improve the user experience.

MOVING SOFTWARE TESTING TO THE CLOUD

Information technology (IT) firms spend hundreds of billions every year on software testing because consumers and businesses expect the software and apps they purchase to work as they expect. These firms invest in servers, databases, storage, operating systems, and testing tools, all of which need to be upgraded and maintained. The cost is generally accepted because the risk of delivering a flawed product greatly outweighs the cost of thorough testing.