By modifying the hardware of a standard radio set with layers of operational software, a software-defined radio (SDR) system can greatly expand its versatility and power efficiently and cost-effectively. Digital and SDR technology provide radio reception a stronger, more durable signal. SDR may also allow for the centralization of common applications that rely on radio communication.

Radio remains the most useful and most widely used communication technology for sharing both entertainment and information. The basic technology of the conventional radio is simple: radio waves are enriched with information—music, talk, weather, news—and sent wirelessly from a transmitter to a receiver. The receiver might be down the street, or halfway around the earth. The source emits a steady radio signal whose frequency or amplitude is modulated to add the message information. Then, signal is beamed from large antennas to smaller ones that grab the signal and relay it to a receiver. The receiver uses a mixer to convert the carrier radio frequency (RF) to an intermediate one for easier processing. A filter removes distortion, and the signal is then released into the system's amplifiers, thus recreating the original radio programming. The varieties of radio wave technology—the familiar AM/FM radio bands, walkie-talkies, ham radio systems, emergency notification systems, transportation communication systems—attest to its vital role in moving information efficiently and effectively.

Although such radio systems revolutionized communication, this analog system did present major problems. The signal (that is, the energy wave itself) was tied to the information being sent. If the wave is disrupted or compromised, the information itself is compromised. This has led to frustrations with reception, the clarity of a signal. Signals are vulnerable to distortions within the atmosphere, most notably from rain, fog, or solar activity. They can also be disrupted or even lost due to surfaces coming between transmitter and receiver. Nearly any solid object, from trees to buildings, can destabilize a radio signal. And the strength of the original broadcast signal and the range of receiver also impact the reach (and quality) of the signal. Because the information is relayed by waves, the analog radio set relies on an array of hardware components, each with a radio chip designed to perform one crucial function. The physical layout of each component—antenna, mixer, amplifier, modulator, and sometimes, converters—can be considerable. Analog radio, although useful and remarkably versatile, is thus cumbersome, costly, and not entirely reliable.

Software-defined radio (SDR), like analog radio, transmits acoustic information from a source to a destination and uses similar equipment. However, SDR addresses several longstanding issues, from sound quality to cost. 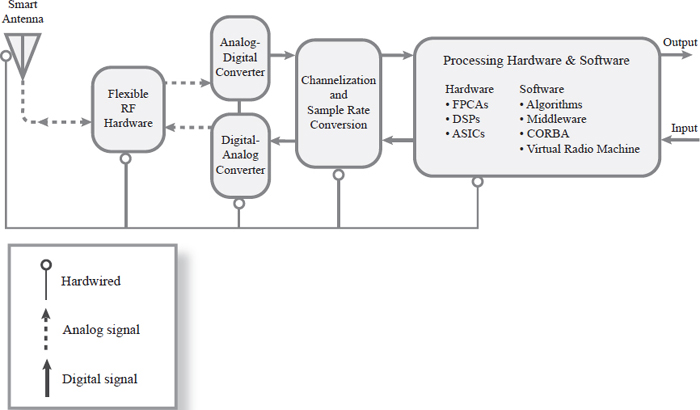 Software defined radio replaces much of the hardware needed for standard analog radio processing with computer hardware and software. The software requires conversion of the signal from analog to digital before processing.
Adapted from McSush derivation of Tarkvaralise raadio plokkskeem.

The SDR process begins with the microphone where the initial audio data are created. As in analog radio, an amplifier is fed the signal and strengthens it for transmission. That signal is sent through an analog-to-digital converter that recasts the information as ASCII data. ASCII is an encoding system that converts English language content into numbers. This makes the transfer of the signal to another computer possible. A modulator then presses that ASCII data onto the designated RF carrier. Amplifiers strengthen the signal to the degree necessary to broadcast it from a software-defined antenna. A software-defined receiving antenna retrieves the signal, which is converted to a stable frequency. Then, a demodulator separates the ASCII data from the RF carrier. A digital-to-analog converter in a sound card reproduces the information. An amplifier then projects it into a speaker system, headphone, or earpiece. Software is used in as much of the signal processing as possible in SDR systems.