Smart-home technology encompasses a wide range of everyday household devices that can connect to one another and to the Web. This connectivity allows owners to program simple daily tasks and, in some cases, to control device operation from a distance. Designed for convenience, smart homes also hold the promise of improved independent living for elderly people and those with disabilities.

THE EMERGING FIELD OF HOME AUTOMATION

Smart homes, or automated homes, are houses in which household electronics, environmental controls, and other appliances are connected in a network. Home automation is a growing trend in the 2010s that allows owners to monitor their homes from afar, automate basic home functions, and save money in the long run on utility payments and other costs. Creating a smart home generally involves buying a hub and then various smart devices, appliances, plugs, and sensors that can be linked through that hub to the home network. Setting up a smart home is costly and requires strong network infrastructure to work well.

Not all smart devices are designed to connect in the same way. Wi-Fi enabled devices connect to Wi-Fi networks, which use super-high frequency (SHF) radio signals to link devices together and to the Internet via routers, modems, and range extenders. Other smart devices have Bluetooth connectivity. Bluetooth also uses SHF radio waves but operates over shorter ranges. Assorted Bluetooth devices may be connected to a smart-home network for remote in-home control but cannot be operated outside the home. Essentially, a Wi-Fi network is necessary for Internet-based control.

More advanced options for smart-home networking involve mesh networks. In these networks, each node can receive, repeat, and transmit signals to all others in the network. Mesh networks may be wired, with cables connecting the nodes. More often they are wireless, using Bluetooth or Wi-Fi to transmit radio signals between nodes. Smart-home network company Insteon has created products linked into dual-mesh networks. Such networks use a dual-band connection, with both wired and wireless connections between the nodes. Dual-mesh networks are designed to avoid electronic interference from outside signals coming from sources such as microwave ovens and televisions. In a dual-mesh network, interruption to the power lines entering the home or to the home's wireless network will not prevent signal from reaching a networked device. Mesh networks also work with devices from different manufacturers, while other types of networks may not be compatible with all of an owner's devices.

Different types of devices can be connected to smart-home networks. Smart light switches and dimmers can be used to control existing light fixtures, turning lights on or off or connecting them to a scheduler for timed activation. A smart-home owner might program their lights to coincide with the sunrise/sunset cycle, for example. The use of smart plugs also allows for the control of existing, ordinary devices. Smart kitchen appliances and entertainment units are becoming available as well. 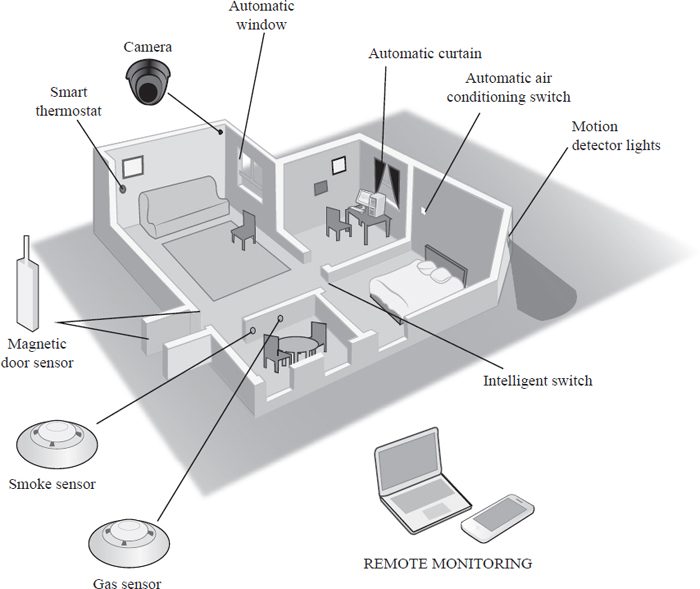 There are a number of devices and technologies available to improve a home's efficiency and sustainability, allowing individuals to customize their environment at any time, anywhere. Some products, such as programmable thermostats, can be programmed to run only at the optimal time needed to reduce resource use. Others such as motion-sensored lights are designed to respond instantly to demand. There are even devices that sync to a smartphone and allow the homeowner to control security, lighting, and many other devices remotely.
EBSCO illustration.
GOALS AND CHALLENGES

Smart-home technology is part of a technological movement called the Internet of things (IoT). IoT is based on the idea that devices, vehicles, and buildings will all someday be linked into a wireless network and collect and communicate data about the environment. This concept relies on ubiquitous computing, the practice of adding microprocessors and Internet connectivity to basic devices and appliances. Ubiquitous computing aims to make data processing a constant background activity embedded in daily life.

While still in its infancy, smart-home technology is intended to enhance security and convenience for homeowners. A home could be configured, for instance, so that motion sensors detecting activity in the morning open window shades, turn on a coffee maker, and raise the heat. Although still largely a hobbyist industry, home automation is also beginning to help elderly people and those with disabilities. Features such as voice activation, mobile apps, and touch screens make it easier for those owners to control their environment and live independently.

Consumers have been slow to adopt smart-home technology for several reasons. One is fear that manufacturers will use such devices to collect and sell data about their personal habits. Another is fear that the security of such systems could be hacked and 4 Science Reference Center™ Smart Homes lead to safety issues such as burglary. The multiple users' preferences, power dynamics, and rapid shifts in schedule that present in family life pose further challenges for smart-home systems. With the debut of wearable digital devices like smart watches, some companies are experimenting with linking wearable and smart-home devices. Wearable devices that can record biometric data could be used to verify a homeowner's identity for increased security and personalization, for example.