Removable memory systems allow the user to store digital data and transfer them between computer systems. Using magnetic, optical, and circuit-based systems, removable memory has evolved throughout the digital age and continues to be widely used, though cloud storage may eventually take its place. 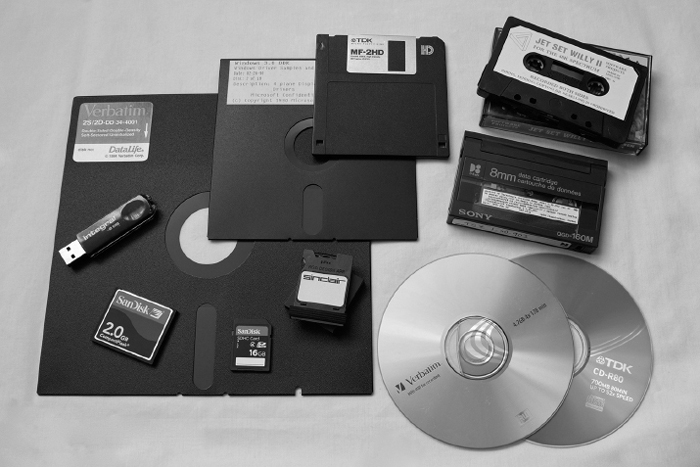 Removable memory comes in many forms, partly because of changes in technology and partly because they solve different challenges for the user. Most external data storage devices have some balance of portability and durability.
By avaragado from Cambridge, CC BY 2.0 (http://creativecommons.org/licenses/by/2.0), via Wikimedia Commons
MAGNETIC AND OPTICAL STORAGE MEDIA

The earliest forms of computer memory consisted of punch cards that represented digital data physically. The data could then be read and interpreted by a computer. In the 1950s computer engineers began using magnetic storage. Magnetic storage uses electronic heads to write and read data on a tape or other material coated with a magnetically sensitive substance. The floppy disks that were popular in the 1970s and

1980s for storing data and applications were a form of magnetic storage. In the 1980s computer scientists developed the first optical storage systems. In these systems, data was stored by making physical marks on a medium coated with a light-sensitive material. A laser could imprint the storage medium with digital data. It could then read the data and translate it into electrical signals that could be interpreted by a computer. Commonly used optical storage media included CD-ROMs and later DVD technology. Blu-ray discs are also examples of optical storage technology. Meanwhile, advances in magnetic storage led to the debut of shingled magnetic recording (SMR) devices. SMR devices can create layers of magnetic data that partially overlap like roof shingles. This gives them vastly increased storage capacity.

Among the earliest types of solid-state storage was read-only memory (ROM). This typically refers to a storage system that is built into a computer and cannot be erased or altered by a user. Some modern ROM systems, however, can be altered by the user with specialized tools. A computer's ROM usually contains the basic instructions that the computer needs to function. CD-ROMs are so-called because the information they hold also cannot be changed or erased, although they are not solid-state technology.

In the 1990s a variety of solid-state removable memory systems were introduced to the consumer market. These included flash memory chips and drives that store data as electrical signals. The popular thumb drives, USB drives, and other memory cards and drives are solid-state storage media. Engineers have also created multi-level cells (MLC), which can store more digital data in each electrical cell and so provide vast increases in storage capacity.

Removable media, while still used for many applications, is rapidly changing due to growth of virtual data storage. Cloud networks let users save data to the Web and later retrieve the data using any Internet-enabled device. They are rapidly replacing the use of removable storage and external hard drives for maintaining personal and organizational data. In addition, engineers have begun using virtual networks to increase processing capability by distributing tasks across several different computers. As cloud storage and virtual networks handle more of the storage and processing, removable storage may be used less and less by consumers while data centers have greater need of physical storage.