A programming language is a code used to control the operation of a computer and to create computer programs. Computer programs are created by sets of instructions that tell a computer how to do small but specific tasks, such as performing calculations or processing data.

WHAT ARE PROGRAMMING LANGUAGES?

There are many different types of programming languages. First-generation, or machine code, languages are processed by computers directly. Such languages are fast and efficient to execute. However, they are difficult for humans to read and require advanced knowledge of hardware to use. Second-generation languages, or assembly languages, are more easily read by humans. However, they must be converted into machine code before being executed by a computer. Second-generation languages are used more often than first-generation ones because they are easier for humans to use while still interacting quickly and efficiently with hardware. 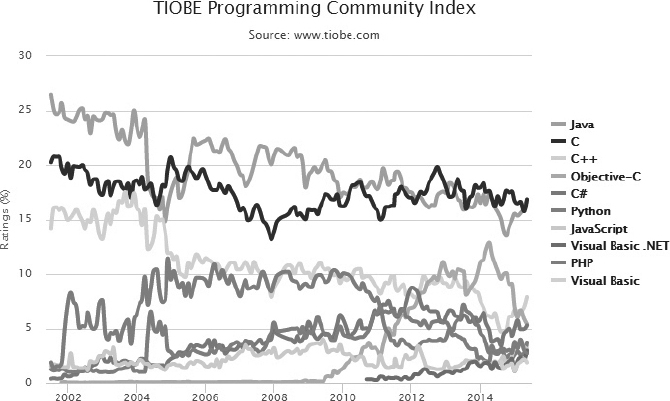 On the TIOBE index for various programming languages, C and Java are the highest-rated languages.
By TIOBE Software B.V., CC BY-SA 4.0 (http://creativecommons.org/licenses/by-sa/4.0), via Wikimedia Commons.

Programming languages can be based on different programming paradigms or styles. Imperative languages, such as COBOL, use statements to instruct the computer to perform a specific sequence of operations to achieve the desired outcome. Declarative languages specify the desired outcome but not the specific sequence of operations that will be used to achieve it. Structured Query Language (SQL) is one example.

HOW PROGRAMMING LANGUAGES ARE STRUCTURED

The pseudocode below describes an algorithm designed to count the number of words in a text file and to delete the file if no words are found:

THE FUTURE OF PROGRAMMING LANGUAGES

Programming languages are growing in importance with the continued development of the Internet and with the introduction of new programmable machines including household appliances, driver-less cars, and remotely controlled drones. Such systems will increase the demand for new programming languages and paradigms designed for larger, more complex, and highly interconnected programs.