Personalized medicine is the use of information about a patient's biology—especially his or her personal genome—to provide custom tailored health care. Practitioners seek to use a patient's genetic and biological characteristics to better understand and predict his or her health risks and drug responses.

No two people are identical. Individuals differ from one another in countless ways, some obvious (height, weight, sex) and some less so (hormone production, brain chemistry, genetic makeup). Because of these differences, no two people get sick in exactly the same way. Personalized medicine seeks to use a patient's biometrics to make predictions about his or her health and provide specialized treatment.

Personalized medicine researchers look for connections between certain biomarkers and an individual's health-related traits. Biomarkers are biometrics that correlate to important biological traits or conditions, such as disease risk. For example, a low number of red blood cells in a patient's blood is a biomarker for anemia.

The backbone of personalized medicine is human genomics, the study of the human genome. “Genome” may refer to a species-wide or a personal genome. A species-wide genome is the order in which genes appear in the DNA of all members of one species. The particular alleles, or variants, of those genes differ between individuals. The Human Genome Project was a species-wide genome project, completed in 2003, that produced the first comprehensive map of the human genetic sequence. A personal genome is an individual's unique DNA makeup, including both the genetic sequence and the specific alleles of each gene.

One powerful method of identifying potential genetic biomarkers is a genome-wide association study (GWAS). This process involves studying the genomes of many individuals to search for correlations between certain genes and certain health traits. Once a potential genetic marker is identified, researchers can use more targeted methods to further explore the connection.

Examples of such biomarkers include mutations in the BRCA1 and BRCA2 genes, which produce tumor-suppressing proteins in humans. Mutations in these genes are associated with a higher risk of cancer, particularly breast, ovarian, and prostate cancers. (The “BRCA” in the gene names stands for “breast cancer.”) This marker was discovered and described prior to GWAS technology, using a mix of patient health histories and more limited genetic analysis to identify the genes in question. 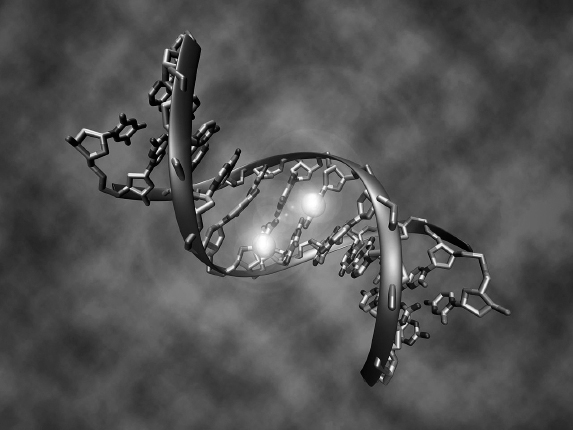 Personalized medicine is developed by analyzing the patient's DNA and determining the ideal treatment based on his or her unique genetic makeup.
By Christoph Bock, Max Planck Institute for Informatics, CC BY-SA 3.0 (http://creativecommons.org/licenses/by-sa/3.0), via Wikimedia Commons.
THE GENOMICS OF DRUG RESPONSE

The vanguard of personalized medicine and human genomics is a subfield known as pharmacogenomics. This field studies the influence of individuals' genomes on their responses to various drugs. Toxgnostics, a related subfield, focuses on whether a patient will have a toxic response to certain medications based on his or her personal genome. The goal of pharmacogenomics is to replace the “one size fits all” drug model with prescriptions tailored to each patient's biology.

The amount of data contained in a single human genome is very large. When studying many individuals' genomes, this information quickly grows unwieldy. Personalized medicine, with its emphasis on genomics, is only made possible by extremely powerful computers and specialized software designed to analyze large amounts of data. Fortunately, technology has advanced very quickly in this field, so that functions that once took several years can now be done in days.