Routing and switches are two vital parts of any computer network. A switch is a piece of hardware that connects devices on a network, directing communications traffic within the network as terminals and hardware devices send data to one another. Routing is the part of the network protocol that directs individual packets of data to the right destination.

Routing is the method by which a packet of data is transmitted to its destination. In computer networks, routing is accomplished by packet switching. This term describes how packets of data are moved from one node to another in a network. A network is made up of multiple nodes, which can be devices such as printers or computers. Nodes can also be network hardware such as switches, which direct network traffic. These devices communicate with each other by sending messages over the network. Each message is divided into units of data called “packets,” which are sent across the network individually and then reassembled once they all reach their destination. Each packet may take a different path to the destination, because when a packet reaches a node, it is forwarded to another node based on the state of the network at that instant. This is called packet forwarding. 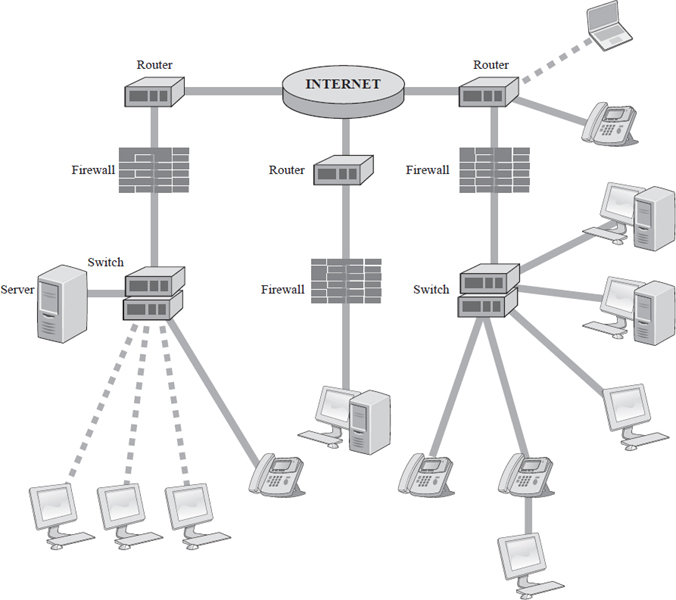 Switches are built into computer circuitry and systems to augment the signal flow throughout the system. The arrangement of switches and the criteria that open and close them will determine what components of the system are used.
EBSCO illustration.
HISTORY OF NETWORK ROUTING

The reason that data is transmitted via packet switching is due to the origins of the Internet. The Internet began as a research project of the US Department of Defense, which wanted to design a communication network that could function even if some parts of the network failed. A direct line of communication, such as a telephone wire, could be easily disrupted by cutting the wire. However, a packet-switched network, with many possible pathways from origin to destination, would be less vulnerable. If one part of the network is damaged, the packets can be routed around the affected nodes and reach their destination by another path. This communication method proved so successful that the resulting networks continued to grow and connect with one another, network to network, until they formed the Internet as it is known today.

COMMUNICATION WITHIN AND BETWEEN NETWORKS

The power of the Internet is due in part to the robust performance of packet-switched networks and in part to the fact that it is essentially a network made up of other networks. The fact that networks can be connected to each other has allowed the Internet to grow at a phenomenal rate. Several different types of hardware are used to make this happen.

When an organization decides to build its own network, it uses a switch to connect the different devices that will use the network. In effect, the switch creates the network. In many cases, an organization then divides its internal network into smaller subnetworks, or “subnets.” This is done when groups of computers need to communicate often with each other but only rarely with other computers in the organization. It is more efficient to set such groups apart so that the subnet's communications do not compete with other traffic on the network. Different subnets are connected to one another through a network bridge. A bridge can also be used to connect separate networks.

In order to communicate outside of the organization, a local network must be connected to the rest of the Internet. This is done by configuring one or more gateways, typically using a piece of hardware called a “router.” Making this connection can leave the local network vulnerable to external attack. To prevent this, a common practice is to set up a firewall on the gateway to filter out suspicious activity, such as hackers probing the network to see if it is vulnerable.

When a user on a local network goes online to check the weather forecast, that person uses their computer to send a request to the server containing the weather data. The request is broken down into multiple packets of data. Packets are transmitted between nodes on the local network until they reach the gateway. They then travel out into the Internet, where they eventually reach their destination and are reassembled. The response is sent from the server back to the local user in the same way.

Understanding the nature and function of routing and switches is important for a number of reasons. Among the most important is that it helps people understand the mechanics of protecting their computers from hackers, viruses, and other dangers found on the Internet.