Devices with multitouch displays allow a user to touch a screen to enter commands and data. Traditional touchscreens could only respond to a single touch, as when a user touches a button on the screen. Multitouch displays can interpret touches from more than one conductive surface, such as two or more fingers, allowing for a greater range of inputs and responses.

Multitouch displays are an innovation in computer input technology. Input technology takes several forms. Users can enter information into a computer using a keyboard. They type commands that the computer executes. Users can also move a mouse to control the movement of a cursor on the screen. More recently, touchscreens began to be used. Touchscreens display functions that users can activate by touching graphics on the screen. Multitouch displays take this capability a step further. They allow users to touch the screen with more than one finger at once. Users can combine touch and gestures to issue commands to the computer. For example, if a user wished to move a photo on a multitouch display screen, the user could touch the screen and slide the photo across it, just as if they were sliding a piece of paper across a table. A multitouch display senses the user's touches and movement and determines how the image should appear to move. 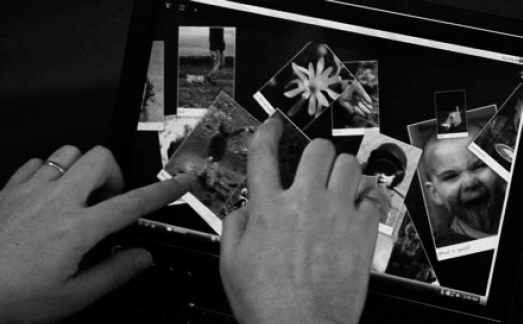 Multitouch displays allow users to manipulate things onscreen using multiple fingers at once. Standard gestures cause specific actions for objects onscreen (e.g., touching at two points and turning to rotate), much as specific mouse gestures are expected to cause specific actions (e.g., click and hold to drag an object).
Kenneth M Pennington, CC BY 3.0 (http://creativecommons.org/licenses/by/3.0), via Wikimedia Commons.

From an engineering standpoint, there are several ways to design multitouch displays. Each has its own method for the computer to sense multiple touches and movements and then to use software to interpret what these touches and movements mean. Some methods rely primarily on electrical conductivity between the user (a person's fingers, most often) and the display. Surface capacitive technology uses a conductive film to coat the display. When the user touches the film, a circuit is completed and the display can detect where it was touched. Projected capacitive touch uses the same basic idea of detecting completed circuits, but instead of a conducting film coating the display, a grid of conductive material is etched into the display's glass.

Some multitouch displays rely on optics instead of capacitive touch. Optical touchscreens use visual sensors, which are like tiny cameras. They detect when an object is about to touch the display and at what location. These systems can be preferable when touchscreen input from nonconductive objects may be necessary. For instance, a major drawback of capacitive touchscreens is that one cannot use them while wearing gloves. An optical touchscreen, on the other hand, will still respond to a touch from a gloved hand because it detects the touch without relying on conductivity. This means that multitouch displays located outdoors in cold climates will be much more user-friendly if they have optical touchscreens.

Another category of multitouch displays uses neither optics nor capacitive touch. Instead, it can sense the amount of force the user employs when touching the display. This category is described as force-sensing touch technology. Within this category, resistive touchscreens are the most common form. Resistive touchscreens can tell how hard a user is pressing because they contain several layers of material separated by tiny spaces. When a user touches the display lightly, only a few layers are compressed enough to come into contact with one another. A touch with greater force behind it will cause more layers to compress. As layers touch one another, they complete a circuit and send a signal to the device about the location and amount of force used.

One main advantage to using multitouch displays is that they allow users with little or no training to input information that would otherwise be time-consuming to enter into a computer or that would require more technical knowledge than the average user has. For example, a user wishing to rotate an image to a more pleasing orientation would probably not know that they want to turn the image precisely 37 degrees to the right. Even if the user did know how many degrees to rotate the image, typing this into a computer or using a mouse to make the adjustment would take much more care than simply touching the corner of the image and sliding a finger in an arc to the right.

Not surprisingly, much of the growth in multitouch displays has been driven by the mobile computing industry. As ever more computing power is packed into ever smaller devices, consumers find themselves navigating websites on ever smaller screens. One of the more frequent multitouch gestures used is the pinch-to-zoom option. This feature lets one magnify a particular part of the information being displayed on the screen, as if one were zooming in with a microscope.

Moss, Frank. The Sorcerers and Their Apprentices: How the Digital Magicians of the MIT Media Lab Are Creating

the Innovative Technologies That Will Transform Our Lives. New York: Crown Business, 2011. Print.