A multi-user operating system (OS) is one that can be used by more than one person at a time while running on a single machine. Different users access the machine running the OS through networked terminals. The OS can handle requests from users by taking turns among connected users. This capability is not available in a single-user OS, where one user interacts directly with a machine with a single-user operating system installed on it.

A computer's operating system (OS) is its most fundamental type of software. It manages the computer system (its hardware and other installed software). An OS is often described as the computer's “traffic cop.” It regulates how the different parts of the computer can be used and which users or devices may use them. Many OS functions are invisible to the user of the computer. This is either because they occur automatically or because they happen at such a low level, as with memory management and disk formatting. 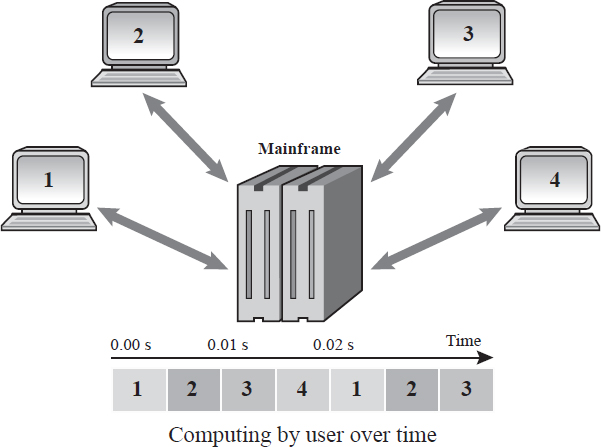 Multi-user operating systems are designed to have multiple terminals (monitor, keyboard, mouse, etc.) all connected to a single mainframe (a powerful CPU with many microprocessors) that allocates time for each user's processing demands so that it appears to the users that they are all working simultaneously.
EBSCO illustration.
SHARED COMPUTING

In order for an OS to be able to serve multiple users at once, the system needs to have either multiple processors that can be devoted to different users or a mechanism for dividing its time between multiple users. Some multi-user OSs use both strategies, since there comes a point at which it becomes impractical to continue adding processors. A multi-user OS may appear to be responding to many different requests at once. However, what is actually happening inside the machine is that the computer is spending a very small amount of time on one task and then switching to another task. This is called time-sharing. This task switching continues at a speed that is too fast for the user to detect. It therefore appears that separate tasks are being performed at once. Multi-user OSs function this way because if they handled one task at a time, users would have to wait in line for their requests to be filled. This would be inefficient because users would be idle until their requests had been processed. By alternating between users, a multi-user OS reduces the amount of time spent waiting. Time-sharing is one aspect of resource allocation. This is how a system's resources are divided between the different tasks it must perform.

One example of a multi-user OS is the software used to run the servers that support most webmail applications. These systems have millions or even billions of users who continually log on to check their messages, so they require OSs that can handle large numbers of users at once. A typical webmail application might require hundreds of computers, each running a multiuser OS capable of supporting thousands of users at once.