Mesh networking is one way of organizing a network. It was designed for military applications requiring high performance and reliability. All of the nodes in a mesh network transmit data across the network. In some mesh networks, each node has a connection to every other node. These types of mesh networks are highly resilient, but they can become costly as the network grows in size.

Mesh networking is a type of network topology. It was developed because of the limitations of other types of network topologies, such as star networks, ring networks, and bus networks. While these designs have some advantages, experience showed that they are vulnerable to device failure. In some scenarios, the failure of a single node could prevent the entire network from functioning. Furthermore, adding more nodes to these networks could be challenging, as it sometimes required changing the existing network to accommodate new equipment.

Mesh networks are designed to keep functioning even when one or more nodes fail. When this occurs, unaffected nodes are able to compensate for the damage the network has suffered. The ability of mesh networks to respond to broken nodes has led some to describe them as “self-healing,” because they adapt their layouts in order to keep functioning.

Most mesh networks are wireless rather than wired. Wireless technology has advanced enough that different types of wireless antennas can be incorporated in a single device or node on the network. This allows for greater versatility in the type and number of connections that nodes can make with one another. In addition, wireless mesh networks are easier to set up than wired ones, because there is no need to install physical cables connecting all of the nodes on the network.

HOW A MESH NETWORK WORKS

There are two main methods that a mesh network uses to convey information from one point to another. The first of these methods is routing. To route data, the network first calculates the most efficient route for data packets to take. This may be done through the use of a routing table, which is a list of routes that can be used to reach various points on the network. This is analogous to looking up a person's address before driving to their house for a visit. Using the information from the routing table, packets travel by hopping from node to node until they finally reach their destination. This is similar to a person jumping from stone to stone in order to cross a stream, where each stone represents a node on the network.

Another approach to network navigation is flooding. With this method, the network does not need to determine the best path a data packet to take. Instead, the node simply sends a copy of the packet to every other node it is attached to. Each of these nodes then does the same thing, and the process is repeated. This is called flooding because the network is quickly flooded with copies of the packet being transmitted. While this may seem redundant, the redundancy creates greater certainty that the packet will reach its destination. 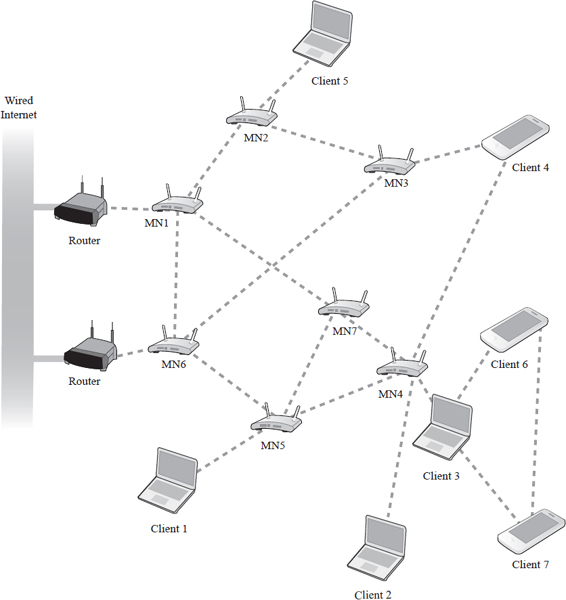 Wireless mesh networks make use of a spiderweb-like design that allows multiple pathways for data to travel from one client to another. This allows data to move quickly by taking the path of least resistance at any given instant.
Adapted from the WMN Topology diagram, Communications Network Research Institute.
PEER-TO-PEER NETWORKS

A peer-to-peer (P2P) network is a type of mesh network. P2P networks are used to share files. Hundreds of thousands of computers are joining and leaving the mesh network at any given moment. Each peer computer is able to share its locally stored files with other peers on the network.

Mesh networks have useful applications in many different contexts. For example, they have often been used in underdeveloped regions to provide affordable and reliable Internet access to large numbers of people without having to run cables to each household. Instead, homes are provided with wireless Internet access points configured to connect to one another, so that an entire city can quickly be blanketed in Internet access.