Graphics formats are standardized forms of computer files used to transfer, display, store, or print reproductions of digital images. Digital image files are divided into two major families, vector and raster files. They can be compressed or uncompressed for storage. Each type of digital file has advantages and disadvantages when used for various applications.

A digital image is a mathematical representation of an image that can be displayed, manipulated, and modified with a computer or other digital device. It can also be compressed. Compression uses algorithms to reduce the size of the image file to facilitate sharing, displaying, or storing images. Digital images may be stored and manipulated as raster or vector images. A third type of graphic file family, called “metafiles,” uses both raster and vector elements. 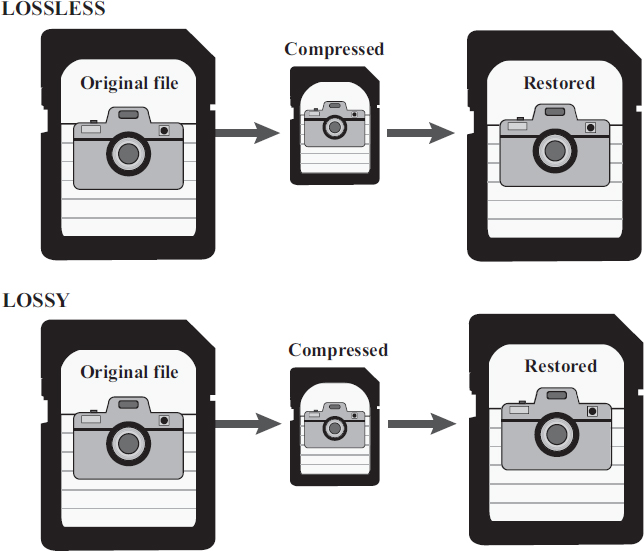 Depending on the image format, data may be lost after compression and restoration. Loss of image data reduces the quality of the image.
EBSCO illustration.

JPEG is a type of lossy image compression format developed in the early 1990s. JPEGs support RGB and CMYK color and are most useful for small images, such as those used for display on websites. JPEGs are automatically compressed using a lossy algorithm. Thus, some image quality is lost each time the image is edited and saved as a new JPEG.

GIF (Graphics Interchange Format) files have a limited color palette and use LZW compression so that they can be compressed without losing quality. Unlike JPEG, GIF supports “transparency” within an image by ignoring certain colors when displaying or printing. GIF files are open source and can be used in a wide variety of programs and applications. However, most GIF formats support only limited color because the embedded LZW compression is most effective when an image contains a limited color palette. PNGs (Portable Network Graphics) are open-source alternatives to GIFs that support transparency and 24-bit color. This makes them better at complex colors than GIFs.

SVGs (Scalable Vector Graphics) are an open-source format used to store and transfer vector images. SVG files lack built-in compression but can be compressed using external programs. In addition, there are “metafile” formats that can be used to share images combining both vector and raster elements. These include PDF (Portable Document Format) files, which are used to store and display documents, and the Encapsulated PostScript (EPS) format, which is typically used to transfer image files between programs.