Fortran is the oldest programming still in common use, and is used primarily for scientific and engineering computations requiring complex mathematical calculations. Fortran has been continually revised since its development at IBM in the 1950s, and is used presently on “supercomputers” with parallel architecture. It is a robust language that is relatively easy to learn, and Fortran programs adhere to a strictly logical format.

Like all programming languages, Fortran has its own syntax, or method in which program commands and statements must be written in order to be “understood” and carried out. A Fortran program is made up of subroutines and function segments that can be compiled independently. Subroutines are termed “external procedures,” and it is characteristic of both Fortran and ALGOL that procedures are only invoked as a result of explicit calls from within the main loop of the program or from another procedure within it. Each segment of the program has local data written into the source code, but additional data can be made available to more than one segment by storing it in blocks of code labeled COMMON. Each Fortran program begins with a statement of the name of the program, followed by the statement “implicit none,” and ends with an “end program” statement for that program, as 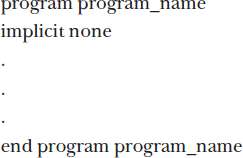 Documentation phrases are added into a Fortran program using the ! character at the beginning of a line. Everything after the ! in that line is ignored by the Fortran compiler, allowing the programmer to describe what each program segment or line of code is intended to achieve. Following the “implicit none” statement, Fortran program have a block of type declaration statements to identify the nature of the variables being used in the program. For example, the type declaration statement

by which the user enters the two values for x and y from the keyboard. Their average value is calculated as the variable z, which is then printed to the default display device, usually the computer screen or an attached printer.

Write a Fortran program that asks for the input of four values and outputs their average. 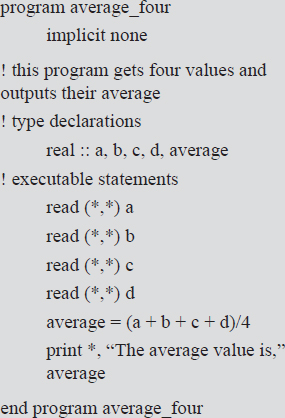 FORTRAN IN THE PRESENT DAY

The straightforward and strictly logical manner in which Fortran programs are written is very suitable for use in complex applications that call for close attention to detail, such as scientific and engineering calculations. This would account for the longevity of the Fortran programming language in those areas, and it is used extensively on modern supercomputers for numerical analysis of complex systems. The robust character of the Fortran programming language ensures that it will continue to be used well into the future.