This article discusses the growing problem of waste in society and goes into the specific issues and challenges surrounding the problem of discarded electronic devices. Electronic waste poses a significant threat to the environment, and various efforts to remediate the issue have been proposed.

One of the defining aspects of the twentieth century was technological advancement. Telephones, televisions, computers, and other electronic devices evolved rapidly and became common throughout the world. This growth continued and even accelerated into the twenty-first century, allowing for easier communication and enabling humanity to see itself in a larger, more global context.

However, these advancements have come at a cost. New communication technologies produce an ever-expanding mass of electronic waste, or e-waste, as electronics break or become obsolete. The immense volume of electronic devices compounds traditional waste-disposal challenges. Many such products present serious pollution problems, especially in the developing world. Though many groups have noted and taken action on the issue, e-waste is a global problem that requires widespread cooperation from the individual to the government level.

Simply put, e-waste is anything electronic that has been discarded. This includes common consumer items such as televisions, computers, microwave ovens, and mobile phones. Some experts further categorize e-waste into three groups: unwanted items that still work or can be repaired, items that can be harvested for scrap materials, and true waste to be dumped. The first two types are considered commodities that may be bought and sold for recycling purposes.

E-waste is a major problem for several reasons. Many electronics use parts made from toxic substances, especially heavy metals. If items are disposed of improperly, these substances can leak into the environment, causing widespread damage. For example, lead used in cathode ray tubes (CRTs) can contaminate water and poison people and animals. Even the recycling process itself creates pollution, as electronics are exposed to chemicals or burned in order to separate valuable elements such as gold and copper. For this reason, various environmental organizations consider some electronics, such as CRTs, to be household hazardous waste. The US Environmental Protection Agency (EPA) has special regulations for disposing of such materials. However, most e-waste is shipped to recycling centers and dumps in developing nations. Many of these countries lack strong environmental regulations, and e-waste pollution has become a major problem for them. 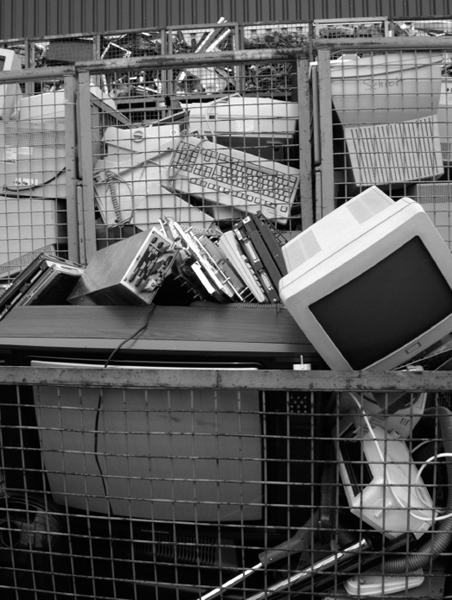 Cell phones are a notable example of e-waste. They are increasingly vital to everyday life in most societies, yet models have relatively short lifespans. Like laptops, they have many parts that can easily break and are not easily replaced, requiring the purchase of a new device. Both production and disposal of cell phones cause significant environmental problems.

Various methods have been proposed to address the issue. Dutch designer Dave Hakkens created the Phonebloks concept to combat planned obsolescence. Phonebloks features a modular design for mobile phones, with interlocking parts connected on a frame. If, for example, the camera breaks, a new camera block can be installed, rather than replacing the whole phone. Consumers can upgrade and customize their phones as they choose. The theory behind Phonebloks attracted corporate and public interest, bringing attention to the problem of e-waste. However, some critics suggested the idea would be very difficult to implement. It could also potentially end up increasing e-waste through constant upgrading.

Public awareness is critical to reducing waste. Many people do not realize their electronics are such a problem after being thrown away. The United Nations (UN) founded the Step (Solving the E-waste Problem) Initiative to coordinate anti-waste efforts at all levels. Others have looked into ways to tackle e-waste already in the environment. Bioremediation encompasses several methods of using organisms to metabolize waste and transform it into less hazardous forms. One method, vermiremediation, uses earthworms to produce enzymes that can absorb and biodegrade hazardous materials. Phytoremediation uses plants to help break down toxins in various ways. Bioremediation can be effective, but it has limitations, such as the amount of time required.

One other complication that arises from e-waste is the problem of identity theft. Many discarded computers and phones still contain personal information. This can be collected by criminals working in recycling centers. According to the US State Department, e-waste is a significant factor in the increase in cybercrime.