E-mail evolved from an earlier form of asynchronous electronic communication: the bulletin-board system. In the 1980s and earlier, before the Internet was widely available to users in their homes, most people went online using a dial-up modem. A dial-up modem is a device that allows a computer to connect to another computer through a telephone line. To connect, the first computer dials the phone number assigned to the other computer's phone line. Connecting in this way was slow and cumbersome compared to the broadband Internet access common today. This was in part because phone lines could only be used for one purpose at a time, so a user could not receive phone calls while online. Because users tended to be online only in short bursts, they would leave messages for each other on online bulletin-board systems (BBSs). Similar to email, the message would stay on the BBS until its recipient logged on and saw that it was waiting.

Another popular method of asynchronous communication is text messaging. Text messaging allows short messages to be sent from one mobile phone to another. The communications protocol technology behind text messages is called Short Message Service (SMS). SMS messages are limited to 160 characters. They are widely used because they can be sent and received using any kind of cell phone.

Other forms of electronic communication software allow for synchronous communication. This means that both the recipient and the sender interact through a communications medium at the same time. The most familiar example of synchronous communication is the telephone, and more recently the cell phone. Using either analog protocols or voice over Internet Protocol (VoIP), users speak into a device. Their speech is translated into electronic signals by the device's communication software and then transmitted to the recipient. There are sometimes minor delays due to network latency. However, most of the conversation happens in the same way it would if the parties were face to face. 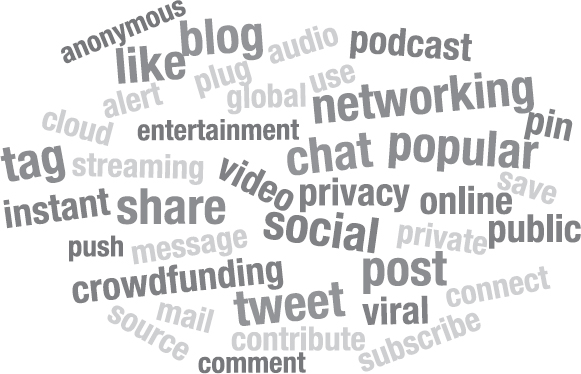 Electronic communication software has many forms to satisfy many uses. The most popular social media and communication companies implement programming that provides users with attributes they deem important for electronic communication, such as private and/or public sharing and posting to a network, saving, contributing, subscribing, and commenting across a number of formats.
EBSCO illustration.

Another form of electronic synchronous communication is instant messaging or chat. Instant messaging occurs when multiple users use computers or mobile devices to type messages to one another. Each time a user sends a message, the recipient or recipients see it pop up on their screens. Chat can occur between two users, or it can take the form of a multicast in which one person types a message and multiple others receive it.

Multicast can also be delivered asynchronously. An example of this type of electronic communication is a performer who records a video of themselves using a digital camera and then posts the video on an online platform such as YouTube. The video would then stay online, available for others to watch at any time, until its creator decided to take it down. This type of electronic communication is extremely popular because viewers do not have to be online at a particular time in order to view the performance, as was the case with television broadcasts in the past.

Some of the newest forms of electronic communication software are pushing the boundaries of what is possible. One example of this is video calling using cell phones. This technology is available in many consumer devices, but in reality its utility is often limited by the amount of bandwidth available in some locations. This causes poor video quality and noticeable delays in responses between users.