Drones are unmanned aerial vehicles (UAVs). Unlike other UAVs, drones are at least partly automated but may also respond to remote piloting. Drones are used in military operations. They are also used for commercial applications like aerial photography and filmmaking, search and rescue, and environmental research. The concept of unmanned aerial vehicles for combat use emerged in the 1800s. Advancements in computer technology and engineering have made drones commonplace in the 2010s for both military and civilian applications.

The term “drone” refers to any of a large number of semi-independent flying vehicles, or unmanned aerial vehicles (UAVs). Military organizations began using UAVs in the form of balloons and kites to conduct aerial surveillance and air strikes in the nineteenth century. Radio-controlled UAVs were used in World War II. In the 1990s advancements in computer technology, sensor capacity, and microengineering led to the development of the first true drones. True drones are remote-controlled vehicles that have some level of automation or self-control. By 2016, nations around the world were using drones for military operations. Drone technology had also become popular for nonmilitary uses, including photography, filmmaking, ecological and wildlife research, and search-and-rescue operations.

While remote-controlled helicopters, planes, and other flying vehicles have been available to hobbyists since the mid-twentieth century, remote-controlled vehicles that qualify as drones differ by having some degree of automation. Most are partly automated and still need some control from a pilot. Drones may be piloted using web-based signals, radio waves, or Bluetooth connections. More advanced drones can automatically avoid obstacles, regulate flight path, and even plot new paths. 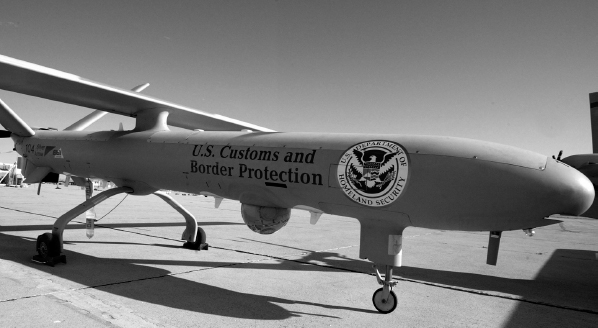 Unmanned aerial vehicles, more commonly known as drones, come in sizes ranging from a small toy to a large plane. They are used by the military for surveillance as well as by civilians for recreation.
By Gerald L. Nino, public domain, via Wikimedia Commons.

Drones typically have sensors that allow the drone to detect, record, transmit, and respond to environmental variables. For instance, drones with high-definition cameras can collect visual data about the environment. Some advanced drones can use this data to adjust their flight path, speed, and elevation. They may also navigate toward certain visual targets. Drones also typically have telemetry equipment. Such equipment collects and transmits data about the drone's location relative to other environmental features. With telemetry and sensors, drone pilots can determine the drone's location. They can then direct the drone toward a target location. Drones may also have communications devices. These devices transmit data back to users and allow them to adjust the drone's activities. Some advanced drones have voice-command software that allows the drone to respond to a user's verbal commands.

Most drones are powered by batteries. The batteries send electrical energy to actuators, engines that use the energy to create movement. This movement powers rotors, jet turbines, and flight control mechanisms. Battery life is one of the major challenges in drone engineering. Long-lasting batteries are also typically heavy and so can only be used in larger drones. Engineers are designing a new generation of solar-electric hybrid drones. These hybrid drones can get additional charge from sunlight, thus greatly increasing the duration of drone flights.

Drones have been used by law enforcement agencies for aerial search and surveillance. They have also been used for search-and-rescue operations. Drones with high-definition video equipment onboard have become a popular tool in journalism and filmmaking. Drones can take aerial shots that once would have been impossible without helicopters. Wildlife and ecological researchers have also used UAVs to take aerial footage. Drones with specialized equipment can be used to collect detailed topographical and ecological data or to monitor weather patterns. Some engineers think that the development of solar-electric hybrid drones may be the key to future weather monitoring. Such hybrid drones may one day replace the use of low-Earth orbit satellites for signal transmission and other applications.

The military use of drones, especially for lethal operations, is among the most controversial issues of the twenty-first century. Drone strikes have been linked to civilian casualties and accidental deaths. Opponents of drone strikes argue that automating military operations is a violation of moral and ethical principles. Another controversy surrounding UAVs is the potential for the technology to be misused for unauthorized or illegal surveillance. Such surveillance would be a threat to personal privacy. In the United States, the Federal Aviation Authority (FAA) is investigating potential regulations for commercial and recreational drone use. State legislators have passed laws that prohibit the use of drones over private property. Governmental regulation of private drone use is still in its infancy. The debate over the legality and potential for misuse has spread around the world, however.