Device drivers are software interfaces that allow a computer's central processing unit (CPU) to communicate with peripherals such as disk drives, printers, and scanners. Without device drivers, the computer's operating system (OS) would have to come preinstalled with all of the information about all of the devices it could ever need to communicate with. OSs contain some device drivers, but these can also be installed when new devices are added to a computer.

HOW DEVICE DRIVERS ARE MADE

Writing device drivers is a highly technical undertaking. It is made more challenging by the fact that device drivers can be unforgiving when a mistake is made in their creation. This is because higher-level applications do not often have unlimited access to all of the computer's functionality. Issuing the wrong command with unrestricted privileges can cause serious damage to the computer's operating system (OS) and, in some cases, to the hardware. This is a real possibility with device drivers, which usually need to have unrestricted access to the computer. 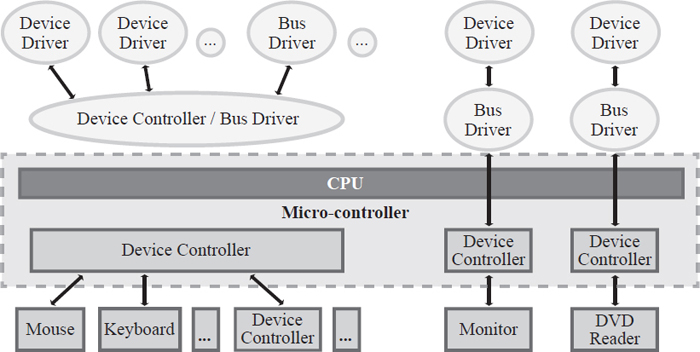 Because writing a device driver requires a lot of specialized information, most device drivers are made by software engineers who specialize in driver development and work for hardware manufacturers. Usually the device manufacturer has the most information about the device and what it needs in order to function properly. The exception to this trend is the impressive amount of driver development accomplished by the open-source movement. Programmers all over the world have volunteered their own time and talent to write drivers for the Linux OS.

Virtual device drivers are a variation on traditional device drivers. They are used when a computer needs to emulate a piece of hardware. This often occurs when an OS runs a program that was created for a different OS by emulating that operating environment. One example would be a Windows OS running a DOS program. If the DOS program needed to interface with an attached printer, the computer would use a virtual device driver.

Most OSs now include device managers that make it easier for the user to manage device drivers. They allow the user to diagnose problems with devices, troubleshoot issues, and update or install drivers. Using the graphical interface of a device manager is less intimidating than typing in text commands to perform driver-related tasks.