Video editing is the process of altering, combining, or otherwise manipulating video frames or sequences of video frames after recording. Early video editing was done with time-consuming and visually limited linear editing techniques. Revolutionary advances in digital technology ushered in the era of nonlinear video editing.

WHAT IS VIDEO EDITING?

Video editing is the process of altering, combining, or otherwise manipulating video frames or sequences of video frames after recording. Cameras create video by recording a series of still images, or “frames,” which when rapidly displayed in sequence, create the appearance of a moving picture. The speed at which video frames are recorded and displayed is the frame rate. This is measured in frames per second (FPS). Early recording technologies used frame rates as low as 16 FPS. By contrast, digital video cameras such as the Go Pro Hero 4 can record at speeds as high as 240 FPS. To achieve the semblance of smooth motion, frame rates of 24 to 30 FPS are used. Higher frame rates are said to provide clear, more lifelike images, while lower ones produce jerkier motion or blurrier video.

The frames recorded digitally are composed of bits. A bit is the smallest unit of data that can be stored and manipulated. The amount of data encoded, in bits, for each second of video is the bit rate. The greater the bit rate is, the higher the resolution and, thus, the quality. However, higher bit rates also result in larger video files.

The advent of digital technology revolutionized video editing. Computer hardware and video-editing software enabled the use of nonlinear editing. Nonlinear editing allows individual video frames to be accessed, altered, moved, copied, or deleted regardless of the order in which they were recorded. The frames can then be combined into a single video sequence using software.

Nonlinear editing enabled video editors to employ a range of new techniques that would have been impossible to achieve previously. One such technique is video scratching, where a sequence of video frames is manipulated to match the rhythm of a piece of music. Another is digital compositing. In this process, video frames from different sources can be combined with each other and with still images and computer graphics to create the illusion that they were all recorded at once. This is related to vision mixing, in which various video sources are combined into a single recording. An example is the combining of footage from multiple cameras at a live event, such as a concert, for a seamless broadcast viewing experience. 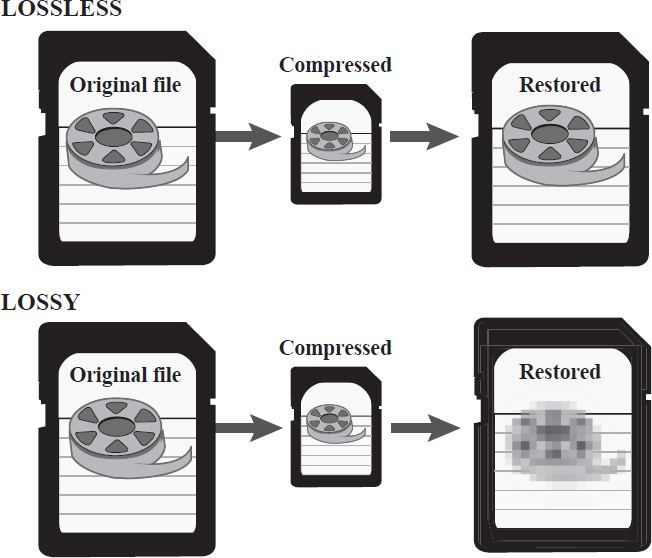 Digital video formats store varying quantities and qualities of data. Choosing the appropriate file format can make a difference when the audio speed amplitude is manipulated, or compressed and restored. With so many video formats available, it is important to choose editing software that is compatible with one's file format of choice.
EBSCO illustration.
SAMPLE PROBLEM

When editing video footage in a digital environment, the size and quality of the final file must be considered. Video file size and video quality are directly related. As the quality of a digital video increases, so does its file size (measured in bits). A video's file size can be calculated using the following formulas:

Calculate the maximum frame rate in FPS that can be used to ensure that a video's file size will be 7,200,000 bits if the pixel density is 1,000 pixels per frame, the color depth is 24 bits per pixel, and the video is 15 seconds long.

Note that this formula only takes the visual portion of a video into account and that to obtain the actual final file size, one would need to calculate the size of the related audio data and add the two together.

Then rewrite the equation in terms of frame rate:

Next substitute in the known values for video size, pixel density, color depth, and video length, and solve:

VIDEO EDITING IN A DIGITAL WORLD

The development of affordable PCs, digital video cameras, and smartphones has brought video editing from the studio to the realm of ordinary people. Video-editing software ranges from applications for PCs, such as Adobe's Premiere, to those designed for smartphones, such as Corel's Pinnacle Studio Pro. Others, such as Apple's iMovie, work on both PC and mobile devices. When used along with social media websites, such as YouTube and Facebook, video-editing software allows users to easily share videos with anyone who has an Internet connection. Thus, anyone with a smartphone can be a video writer, director, editor, and movie studio. This has led to a powerful new form of personal and artistic expression that will continue to grow and change as new video technologies are developed and adopted.