Music editing involves the use of computer technology to alter files of recorded sound. Music files can be compressed, enhanced, combined, or separated through editing software. Both the recording and film industries rely on music editing software to create their products. Compression has enabled the music industry to move away from physical media and has driven the growth of online music transfer. The sharing of audio files has also led to a more collaborative music scene. 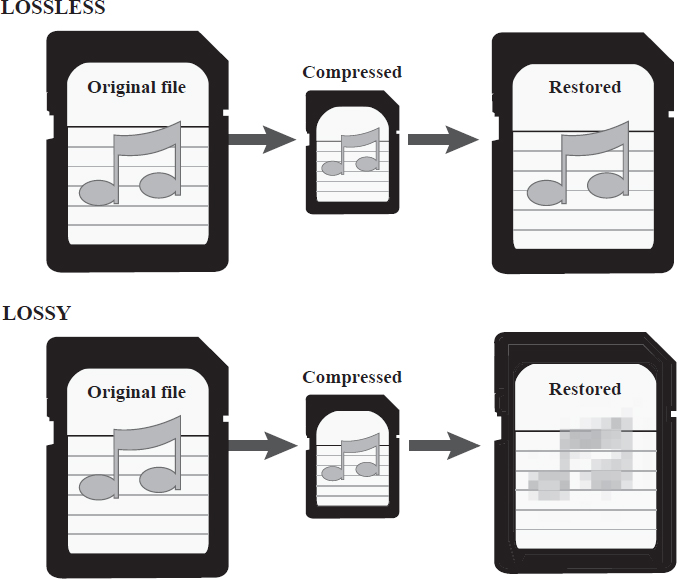 Digital audio formats that store varying amounts and arrangements of data. Choosing the appropriate file format can make a difference when the audio speed amplitude is manipulated, or compressed and restored.
EBSCO illustration.
MIXING AND MASTERING

Music editing software is used by sound engineers working with musicians to record and produce music for commercial purposes. Performers record their music in studios, often in separate sessions. Once all of the recording has been completed, sound engineers begin mixing the tracks together. Mixing combines different sounds into a single audio recording. One track might include the vocals, another the backup singers, and a third the instruments. Recording these separately can help preserve the full depth of sound produced by each source (or input). Sound engineers mix these recordings together such that they support and enhance one another instead of competing. Mixers allow them to adjust the volume of each input (channel), equalize frequencies, reduce noise, add effects, and control channel subgroups (buses). Music editing software usually includes a virtual mixer and a timeline with a scroll bar, allowing the editor to move back and forth along an audio track in a process called scrubbing. Scrubbing is particularly helpful for aligning vocal tracks with other audio tracks or with film visuals.

When the mixing stage has been completed for an album, the next step is mastering. This is the creation of a master recording that can be used to produce copies for sale thereafter. Mastering was much more complex when music was mainly sold on physical media, such as record albums or cassette tapes. The recording master had to be protected from theft, damage, and the ravages of time. Today, most music editing is done entirely digitally. In digital mastering, the mixed audio recording is checked for errors, reformatted for distribution, and then subtly adjusted for the best sound quality possible.

Music editing can be destructive, meaning that changing a recording destroys the original version of the recording. Or it can be nondestructive, in which editing preserves the original recording. The technology that made it possible for music to move away from physical media was compression, specifically the MP3 compression algorithm and file type. MP3 was developed in the early 1990s as a type of lossy compression for audio files. It can greatly reduce the size of an ordinary audio file while losing only a negligible amount of sound quality. MP3 is an audio codec that makes music portable by compressing it into files small enough for transfer over the Internet and for digital storage. A codec can reduce the size of audio files by using shorthand to describe repeated data within the file more concisely. When a compressed recording is played back, it is decoded by the device playing it, provided that the device is equipped with the proper codec. The recording's fidelity (similarity to the original) depends on how much information is kept and how much of the original frequency and dynamic range are captured. For instance, 16 bits of data are encoded for a high fidelity CD as compared to 24 bits in a studio recording.

Motion pictures rely on the skills of sound engineers to mix the film's dialogue, musical score and soundtrack, and sound effects into a single audio accompaniment to the visuals. The process is like that used in a recording studio. However, there is the added complication that not only must the audio tracks all be in harmony, they must also follow the timing of the movie's scenes. Usually the dialogue takes priority with the music and sound effects being mixed in later.

Unfortunately, the development and adoption of the MP3 audio codec made it easier and more common than ever for music to be shared illegally. People found it preferable to make illegal copies of music than to buy it, since those copies essentially retain the same quality as the original. Despite this, some praise the sharing of music online as giving rise to a new culture of remixing. Artists release their creative output into the world for audiences to enjoy it and other artists to build off it and even transform it. In remixing, other artists add their own perspectives to produce a collaborative work that is greater than the sum of its parts. Consumer audio editing software, such as Audacity, Adobe Audition, or Lexis Audio Editor, enables such artists to record and mix music using just their PC instead of a studio.

Saltzman, Steven. Music Editing for Film and Television: The Art and the Process. Burlington: Focal, 2015. Print.