Image editing software uses computing technology to change digital images. Image editing can involve altering the appearance of an image, such as showing a hot air balloon underwater, or improving the quality of a low-resolution image. Images may also be compressed so that they require less computer storage space. 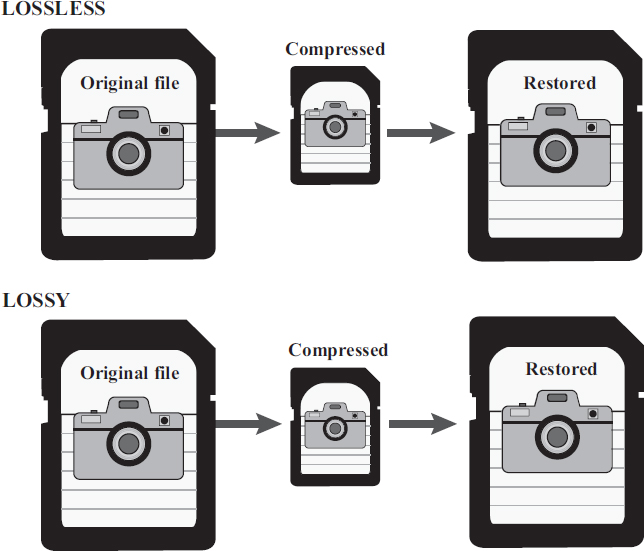 Image formats store varying levels and arrangements of data. Choosing the appropriate file format can make a difference when images are manipulated, resized, or compressed and restored
EBSCO illustration.

In the early days of the Internet, image compression was an especially important type of image editing. Bandwidth was limited then, and it could take several minutes to transmit even a medium sized image file. Image compression algorithms were invented to help reduce the size of these files, with some loss of quality. Lossless compression can avoid degradation of the image, but in most cases, it does not reduce file size as much as lossy compression does.

Most images are compressed using lossy compression algorithms, such as JPEG. Compression thus usually requires that the sacrifice of some image quality. For most purposes, the reduction in quality is not noticeable and is made up for by the convenience of more easily storing and transmitting the smaller file. It is not uncommon for compression algorithms to reduce the file size of an image by 75 to 90 percent, without noticeably affecting the image's quality.

Image enhancement typically relies on the mathematical adjustment of the numeric values that represent pixel hues. For instance, if an image editor were to desaturate a photograph, the software would first recognize all of the pixel values and compare them to a grayscale value. It would then interpolate new values for the pixels using a linear operation. Similarly, a filtering algorithm would find and apply a weighted average of the pixel values around a given pixel value in order to identify the new color codes for each pixel being adjusted. The median or the mode (most common) value could also be used. The type of filter being applied determines which mathematical operation is performed. Filters are often used to correct for noise, or unwanted signal or interference.

Image editing is now even possible on mobile platforms. Certain programs work only on PCs, others strictly on mobile devices, and still others on both. Besides the well-known Adobe Photoshop, other programs, including iPhoto, Apple Photos, Google's Picasa, and Gimp, also provide image editing for desktop computers. Fotor and Pixlr Editor work across platforms, giving users flexibility between their desktop, mobile device, and the Web. Similarly, photo collaging software abounds. Among these programs are Photoshop CC and CollageIt on desktops, Ribbet and Fotojet online, and Pic Stitch and BeFunky on mobile devices.

Nokia and Apple have developed the capability to create “live photos” with their smartphones. These are a hybrid of video and still images in which a few seconds of video are recorded prior to the still photo being taken. This feature represents yet another direction for image capture, alteration, and presentation.