Communication technology is a broad field that includes any type of tool or process that makes it possible for individuals and groups to communicate over large areas. Many types of communication technology have been used throughout recorded history—smoke signals, carved signs and tokens, letters, radio waves, telegraph, television, and microwave signals, to name only a few.

Communication technology at its most basic involves sending a signal from a transmitter to a receiver. The signal carries information in audio, video, or some other data format. It travels in the form of energy waves through a transmission medium. This medium might be a device designed to carry the signal, such as a fiber-optic cable, or it might simply be the air through which a sound wave travels.

The purpose of most communication technology is to translate human language into a signal that can be transmitted through the appropriate medium, then revert the signal to the original format once it is received. For example, audio is sent through a digital telephone line in the form of binary data. When one person speaks, the sound waves they produce are converted into a stream of ones and zeros that represents a digital model of the analog waveform. This stream is transmitted in the form of electronic pulses through an electrical network. (If the network is optical rather than electrical, it is transmitted as light pulses instead.) When the data stream reaches its destination, a receiver reads the binary data and converts it back into analog sound waves that the person on the other end of the phone line can understand. In short, communication technology is all about encoding and decoding messages so they can be sent from one place to another. 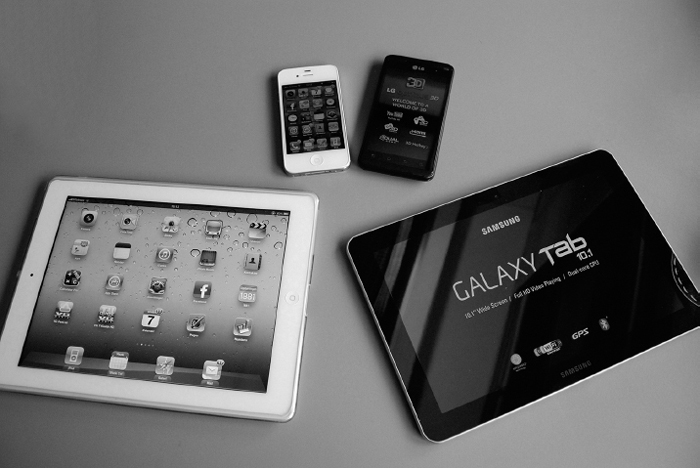 Advances in technology have provided a wide variety of modes of communication. Phones, tablets, computers, and other devices allow people to write, talk, and send images and videos all around the globe.
Public domain, via Wikimedia Commons.
CONSIDERATIONS OF COMMUNICATION TECHNOLOGY

Communication technology is not just about the transfer of information from one individual to another. Mass communication involves the transmission of information on what is called a “one-to-many” basis. A broadcast is the transmission of a single signal to multiple receivers in a given area. This signal can be received by anyone within range who possesses the necessary receiver, such as a radio, a television, or some other device. When a broadcast is transmitted over a very large area, such as a radio broadcast in a major city, the signal may experience some attenuation, or weakening of intensity. This attenuation can be overcome by installing repeaters along the transmission route to help boost the signal. These repeaters work by receiving the original transmission and then rebroadcasting it from a new location. A chain of repeaters can carry a signal significantly farther than it would otherwise travel.

One fact of modern communications is that at any given moment, there are far more messages in need of transmission than there is transmission capacity. This problem is handled in a number of different ways. First, different types of communication technology are used, so that not all communications need to share the same medium. Second, some types of communication technology, such as radio, make it possible to transmit at different frequencies at the same time, so that multiple transmissions can occur simultaneously. Combining transmissions in this way is known as multiplexing. Multiplexing can be accomplished either by dividing up frequencies or by dividing transmission times into very small intervals. These approaches are called frequency-division multiplexing and time-division multiplexing, respectively. In the United States, there is stiff competition for broadcast frequency space among communications technology companies seeking to control as much of the broadcast spectrum as possible.