Computer-aided design (CAD) and computer-aided manufacturing (CAM) are software that enable users to design products and, through the use of computer-guided machinery, manufacture them according to the necessary specifications. CAD/CAM programs are used in a wide range of industries and play a key role in rapid prototyping, a process that allows companies to manufacture and test iterations of a product.

The term “CAD/CAM” is an acronym for “computer-aided design” and “computer-aided manufacturing.” CAD/CAM refers collectively to a wide range of computer software products. Although CAD software and CAM software are considered two different types of programs, they are frequently used in concert and thus associated strongly with each other. Used primarily in manufacturing, CAD/CAM software enables users to design, model, and produce various objects—from prototypes to usable parts—with the assistance of computers.

CAD/CAM software originated in the 1960s, when researchers developed computer programs to assist professionals with design and modeling. Prior to that point, designing objects and creating 3-D models was a time-consuming process. Computer programs designed to aid with such tasks represented a significant time savings. By the late 1960s, CAD programs began to be used alongside early CAM software. CAM enabled users to instruct computer-compatible machinery to manufacture various objects according to digital designs. The use of CAD/CAM software became widespread over the following decades. 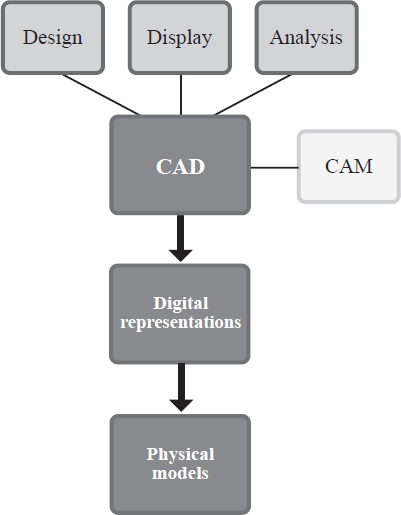 Computer-aided design (CAD) and computer-aided manufacturing (CAM) are used in many industries to fulfill the same basic goals. 3-D items are scanned and analyzed, new items are designed, and those designs can then be translated into manufactured items through CAM, which can develop the program necessary for machines to properly create the new item.
EBSCO illustration.

CAD/CAM is now a key part of the manufacturing process for numerous companies, from large corporations to small start-ups. Industries in which CAD/CAM proved particularly useful include the automotive and computer technology industries. However, CAM software has also been widely used in less obvious fields, including dentistry and textile manufacturing.

Using CAD/CAM software is a two-part process that begins with design. In some cases, the user begins designing an object by using CAD software to create 2-D line drawings of the object. This process is known as “drafting.” He or she may then use tools within the CAD software to transform those 2-D plans into a 3-D model. As CAD/CAM is used to create physical objects, the modeling stage is the most essential stage in the design process. In that stage, the user creates a 3-D representation of the item. This item may be a part for a machine, a semiconductor component, or a prototype of a new product, among other possibilities.

In some cases, the user may create what is known as a “wire-frame model,” a 3-D model that resembles the outline of an object. However, such models do not include the solid surfaces or interior details of the object. Thus, they are not well suited for CAM, the goal of which is to manufacture a solid object. As such, those using CAD software in a CAD/CAM context often focus more on solid modeling. Solid modeling is the process of creating a 3-D model of an object that includes the object's edges as well as its internal structure. CAD software typically allows the user to rotate or otherwise manipulate the created model. With CAD, designers can ensure that all the separate parts of a product will fit together as intended. CAD also enables users to modify the digital model. This is less time-consuming and produces less waste than modifying a physical model.

When designing models with the intention of manufacturing them through CAM technology, users must be particularly mindful of their key measurements. Precision and accurate scaling are crucial. As such, users must be sure to use vector images when designing their models. Unlike raster images, which are based on the use of individual pixels, vector images are based on lines and points that have defined relationships to one another. No matter how much a user shrinks or enlarges a vector image, the image will retain the correct proportions in terms of the relative placement of points and lines.

After designing an object using CAD software, a user may use a CAM program to manufacture it. CAM programs typically operate through computer numerical control (CNC). In CNC, instructions are transmitted to the manufacturing machine as a series of numbers. Those instructions tell the machine how to move and what actions to perform in order to construct the object. The types of machines used in that process vary and may include milling machines, drills, and lathes.

In the early twenty-first century, 3-D printers, devices that manufacture objects out of thin layers of plastic or other materials, began to be used in CAM. Unlike traditional CNC machinery, 3-D printers are typically used by individuals or small companies for whom larger-scale manufacturing technology is excessive.

As CAD/CAM technology has evolved, it has come to be used for a number of specialized applications. Some CAD software, for instance, is used to perform four-dimensional building information modeling (4-D BIM). This process enables a user to incorporate information related to time. For instance, the schedule for a particular project can be accounted for in the modeling process with 4-D BIM.

Another common CAD/CAM application is rapid prototyping. In that process, a company or individual can design and manufacture physical prototypes of an object. This allows the designers to make changes in response to testing and evaluation and to test different iterations of the product. The resulting prototypes are often manufactured using 3-D printers. Rapid prototyping results in improved quality control and a reduced time to bring a product to market.