“Technology” can be broadly defined as the use of scientific knowledge to solve practical problems. All devices, from the earliest stone tools to modern computers, are examples of technology. Biotechnology is the use of organisms or biological products in this problem-solving process.

Farming and animal husbandry are among the earliest forms of biotechnology. They represent the application of knowledge to increase food production. In the twenty-first century, biotechnology spans a broad range of industrial and scientific processes, from gene therapies to skin grafts.

Using animal skins for clothing, or plant material for roofing and food, may seem intuitive by modern standards. However, it took considerable experimentation and careful study to learn how to use natural products. Secondary natural products such as wine and cheese require deeper knowledge of organic interactions. A wine or cheese producer must know how chemical processes and microorganisms modify other biological products (grape juice, milk).

Basic science research into organisms' physiology and behavior drives biotechnology and its subfields. It was first recognized as a unique field of study in the 1970s and soon became one of the fastest-growing industrial fields. Among the more controversial early advancements was the genetic engineering of crops, which became common in the US food market in the 1990s.

Bioinstrumentation develops specialized tools to record data about living organisms. Bioinstruments that record physiological processes such as blood pressure and brain activity have been crucial to advances in medicine. They have also led to products such as wearable heart-rate monitors, which became a popular fitness tool in the 2010s.

Another facet of biotechnology is the development of synthetic technology that mimics biological systems. The subfield of biomechanics has resulted in a variety of medical and industrial products. It also informs the industrial science of bionics, which develops synthetic tools that mirror the form or function of organic structures. For example, Velcro was designed to mimic the way the burrs of some plants cling to soft material such as clothing. Newer adhesive technology uses hydrogen bonding, the same phenomenon that allows geckos to cling even to smooth surfaces.

Bionics is actually a very old field. Many machines and devices, including the earliest flying machines and even building structures, have been inspired by similar biological structures. Bionics and biomechanics are also key to robotics and prosthetics. 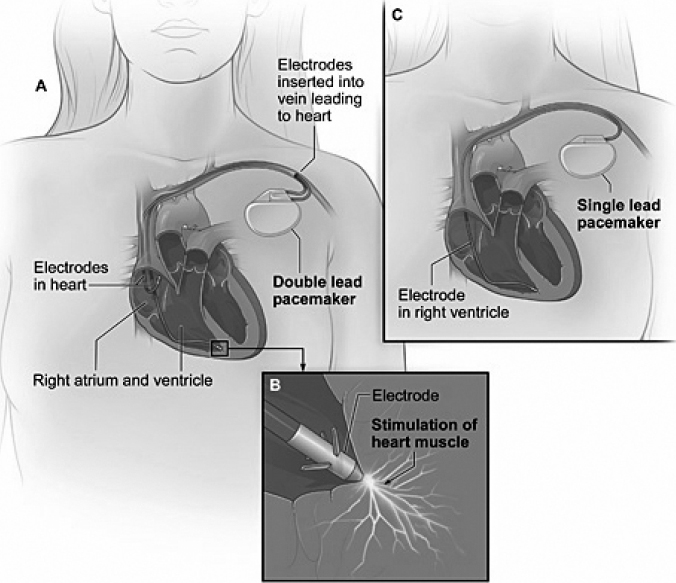 A pacemaker is an example of technology working with a biological system. Biotechnology can enhance the efficiency of a biological system or replace nonfunctional components of the system.
By National Heart Lung and Blood Institute (NIH), public domain, via Wikimedia Commons.
MODIFYING NATURE

Biotechnology may also involve creating new hybrid or modified organisms. Though genetic modification of plants and animals is still in its infancy, it could have dramatic impact on agriculture in coming decades. The ability to modify specific genes and genetic systems also has implications for the future of medicine. For instance, it might lead to the eventual elimination of many genetically transmitted conditions. In addition, the emerging field of pharmacogenomics studies patient DNA to learn how different patients react differently to medications. It may one day be possible to tailor medicine to a patient's particular genetic complement.

The development of genetics, genomics, and other gene-related fields has opened a wealth of new possibilities for biotechnology research. From the earliest wooden tools and animal-skin clothing to robotic systems that mimic biomechanical movement, biotechnology has long played an important role in human life. Today, with scientists studying biological forms and functions at the level of individual genes and cells, biotechnology has become a highly profitable field of industrial and medical research.