Biometrics is the study of biology and metrics, or measurement, especially for the purpose of identifying individuals based on unique characteristics. Digital scanning, measurement, and matching tools are used to create automated systems for verifying identity through the comparison of biometric samples.

THE SCIENCE OF IDENTIFYING INDIVIDUALS

Biometrics is a scientific field that focuses on using human characteristics as identifiers to distinguish between different individuals. These include facial geometry, dermal patterns, biorhythms, and vocal character. Fingerprint identification was one of the first biometric techniques. It was first used in antiquity before becoming a global standard in forensic identification in the 1800s. Advances in computer science have allowed for the development of automated systems capable of identifying and matching other biometric identifiers. These include retinal blood vessel patterns, iris morphology, voices, and DNA.

The ability to identify individuals is an important facet of human culture and society. Most people are instinctively able to identify each other by external features such as facial geometry and voice recognition. However, in some settings these methods are problematic and can lead to high false match rates. Individuals with similar voices or appearances may be mistaken for one another. Biometric science attempts to reduce the probability of false matches by determining the most accurate characteristics to use for identification and by creating systems for increasing the reliability of biometric security systems.

The skin of the human finger contains a pattern of ridges that are unique to each individual. The unique nature of fingerprints was discovered in antiquity, and in some cultures, including ancient Egypt and Babylonia, fingerprints were used in place of written signatures on documents or artworks. In the late 1800s, scientists began experimenting with the use of fingerprints to identify individuals for the purpose of forensic analysis. Fingerprinting quickly became the most widespread form of biometric classification. However, fingerprints can be accidentally or purposefully altered and can be imitated in a variety of ways, limiting their reliability for security and identification. In the twentieth and twenty-first centuries, biometrics specialists identified a number of other unique characteristics that can be used for identification. These include patterns of blood vessels in the retina, the structure of the iris, the geometry of the human face, and the unique genetic code in each individual's DNA. Biometrics became closely tied to advances in computer science that allowed such identifiers to be measured and recorded. 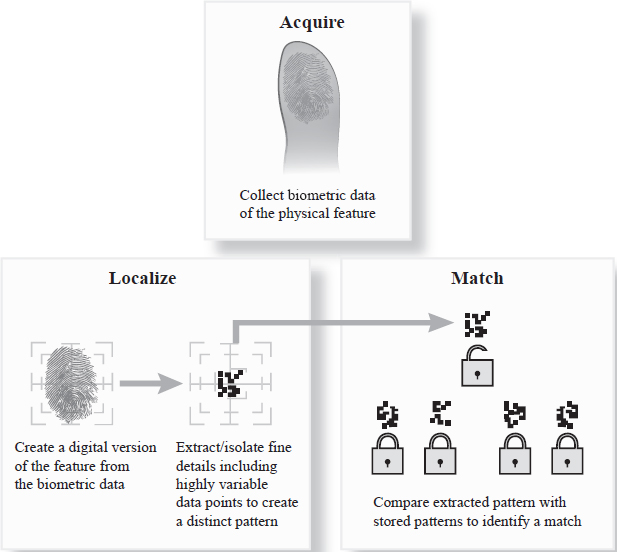 An attribute is scanned to make a digital representation, isolated details of that attribute are used to create an ID template for a particular person, and the template is matched to the “key” ID to retrieve the correct “key” for an individual. The number and location of isolated details must have a large enough hamming distance to ensure there is no duplication of templates.
EBSCO illustration.

When an individual's identifiers are added to a database, the process is called “enrollment.” Future biometric samples can be compared against all samples previously enrolled in the database. In biometric security technology, authorized individuals must first create a template of biometric samples matched with their identity. Any user who attempts to access the system is then asked to submit a biometric sample for validation. If the submitted sample matches an approved template according to a matching algorithm, access is granted. If it does not match, access can be denied.

The twenty-first century has witnessed the commercialization of biometric identification for personal security. Most individuals use passwords, physical keys, or other types of codes to protect property and data. However, these security methods have significant disadvantages. They can be lost, forgotten, stolen, or duplicated. Biometric characteristics, meanwhile, are unique, more difficult to forge, and cannot be lost or forgotten.

Each available biometric system has its own advantages and disadvantages. For example, DNA analysis is the most accurate biometric characteristic. However, it depends on the ability to collect and analyze DNA samples, which is a time consuming and technologically advanced process. Opponents argue that if fingerprints, for instance, are lifted and stolen, the identity theft victim has no recourse like a password reset. Thus, biometrics' use for security may in fact present a great risk. In the 2010s, biometrics systems shifted toward a multimodal approach using multiple identifiers simultaneously to identify individuals. For instance, a number of researchers have suggested that biosignal processing could be used in conjunction with other biometric measures to produce more accurate biometric security and identification systems.