Both the decimal and binary number systems use the relative position of digits in a similar way when representing numbers. The value in the rightmost, or first, position is multiplied by the number of digits used in the system to the zero power. For the decimal system, this value is 100. For the binary system, this value is 20. Both 100 and 20 are equal to 1. Any number x raised to the zero power is equal to 1. The power used increases by one for the second position and so on.

Using the decimal number system, the integer 234 is represented by placing the symbols 2, 3, and 4 in positions 3, 2, and 1, respectively. 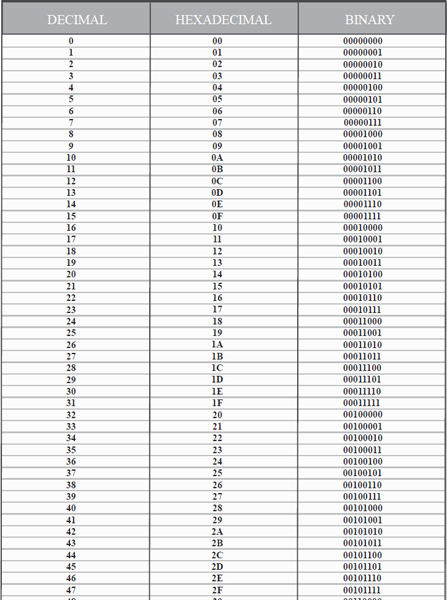 To work with binary numbers in digital applications, it is important to be able to translate numbers from their binary values to their decimal values. Translate the following binary byte to its decimal value: 10111001

The binary number system is used to store numbers and perform mathematical operations in computers systems. Such devices store data using transistors, electronic parts that can each be switched between two states. One state represents the binary digit 0 and the other, the binary digit 1. These binary digits are bits, the smallest units of data that can be stored and manipulated. A single bit can be used to store the value 0 or 1. To store values larger than 1, groups of bits are used. A group of four bits is a nibble. A group of eight bits is a byte.

The hexadecimal number system is a base-16 system. It uses the digits 0 through 9 and the letters A through F to represent numbers. The hexadecimal digit, or hex digit, A has a decimal value of 10. Hex digit B equals 11, C equals 12, D equals 13, E equals 14, and F equals 15. In hexadecimal, the value 10 is equal to 16 in the decimal system. Using hexadecimal, a binary nibble can be represented by a single symbol. For example, the hex digit F can be used instead of the binary nibble 1111 for the decimal value 15. Sixteen different combinations of bits are possible in a binary nibble. The hexadecimal system, with sixteen different symbols, is therefore ideal for working with nibbles.