Avatars and simulation are elements of virtual reality (VR), which attempts to create immersive worlds for computer users to enter. Simulation is the method by which the real world is imitated or approximated by the images and sounds of a computer. An avatar is the personal manifestation of a particular person. Simulation and VR are used for many applications, from entertainment to business.

Computer simulation and virtual reality (VR) have existed since the early 1960s. While simulation has been used in manufacturing since the 1980s, avatars and virtual worlds have yet to be widely embraced outside gaming and entertainment. VR uses computerized sounds, images, and even vibrations to model some or all of the sensory input that human beings constantly receive from their surroundings every day. Users can define the rules of how a VR world works in ways that are not possible in everyday life. In the real world, people cannot fly, drink fire, or punch through walls. In VR, however, all of these things are possible, because the rules are defined by human coders, and they can be changed or even deleted. This is why users' avatars can appear in these virtual worlds as almost anything one can imagine—a loaf of bread, a sports car, or a penguin, for example. Many users of virtual worlds are drawn to them because of this type of freedom.

Because a VR simulation does not occur in physical space, people can “meet” regardless of how far apart they are in the real world. Thus, in a company that uses a simulated world for conducting its meetings, staff from Hong Kong and New York can both occupy the same VR room via their avatars. Such virtual meeting spaces allow users to convey nonverbal cues as well as speech. This allows for a greater degree of authenticity than in telephone conferencing. 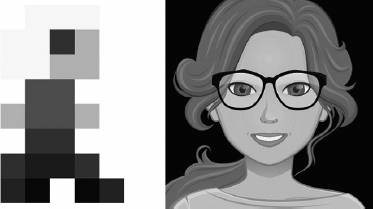 The animation of avatars in computer simulations often requires more computing power than a single workstation can provide. Studios that produce animated films use render farms to create the smooth and sophisticated effects audiences expect.

Before the rendering stage, a great deal of effort goes into designing how an animated character or avatar will look, how it will move, and how its textures will behave during that movement. For example, a fur-covered avatar that moves swiftly outdoors in the wind should have a furry or hairy texture, with fibers that appear to blow in the wind. All of this must be designed and coordinated by computer animators. Typically, one of the first steps is keyframing, in which animators decide what the starting and ending positions and appearance of the animated object will be. Then they design the movements between the beginning and end by assigning animation variables (avars) to different points on the object. This stage is called “in-betweening,” or “tweening.” Once avars are assigned, a computer algorithm can automatically change the avar values in coordination with one another. Alternatively, an animator can change “in-between” graphics by hand. When the program is run, the visual representation of the changing avars will appear as an animation.

In general, the more avars specified, the more detailed and realistic that animation will be in its movements. In an animated film, the main characters often have hundreds of avars associated with them. For instance, the 1995 film Toy Story used 712 avars for the cowboy Woody. This ensures that the characters' actions are lifelike, since the audience will focus attention on them most of the time. Coding standards for normal expressions and motions have been developed based on muscle movements. The MPEG-4 international standard includes 86 face parameters and 196 body parameters for animating human and humanoid movements. These parameters are encoded into an animation file and can affect the bit rate (data encoded per second) or size of the file.

Simulation has long been a useful method of training in various occupations. Pilots are trained in flight simulators, and driving simulators are used to prepare for licensing exams. Newer applications have included training teachers for the classroom and improving counseling in the military. VR holds the promise of making such vocational simulations much more realistic. As more computing power is added, simulated environments can include stimuli that better approximate the many distractions and detailed surroundings of the typical driving or flying situation, for instance.

Most instances of VR that people have experienced so far have been two-dimensional (2-D), occurring on a computer or movie screen. While entertaining, such experiences do not really capture the concept of VR. Three-dimensional (3-D) VR headsets such as the Oculus Rift may one day facilitate more lifelike business meetings and product planning. They may also offer richer vocational simulations for military and emergency personnel, among others.