Autonomic computing is a subfield of computer science that focuses on enabling computers to operate independently of user input. First articulated by IBM in 2001, the concept has particular relevance to fields such as robotics, artificial intelligence (AI), and machine learning.

Autonomic computing is a branch of computer science aimed at developing computers capable of some autonomous operation. An autonomic system is one that is, in one or more respects, self-managing. Such systems are sometimes described as “self-*” or “self-star.” The asterisk, or “star,” represents different properties of autonomic systems (self-organization, self-maintenance). Autonomic computing aims to develop systems that require less outside input, allowing users to focus on other activities. 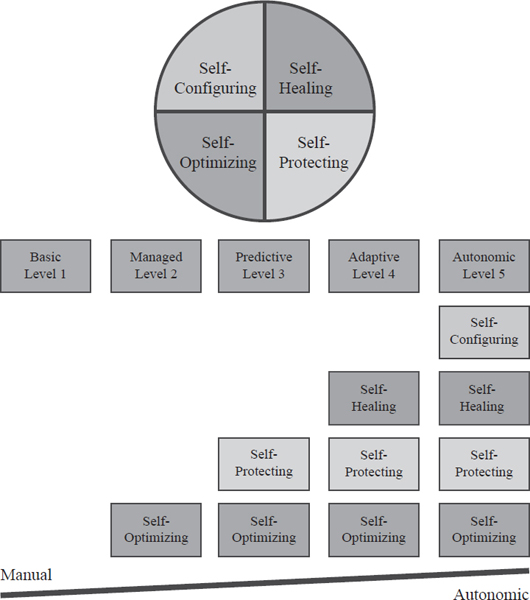 As computer systems have advanced from very basic technologies needing intense IT management toward autonomic systems that can self-manage, there have been four major stepping stones: self-optimizing, self-protecting, self-healing, and self-configuring. Each of these steps toward fully autonomic systems allows for more expansive computing while reducing the skill level required of the end users.
EBSCO illustration.
SELF-STAR SYSTEMS

The concept of autonomic computing is based on autonomic systems found in nature. Examples of such systems include the autonomic nervous system of humans and the self-regulation of colonial insects such as bees and ants. In an autonomic system, the behaviors of individual components lead to higher-order self-maintenance properties of the group as a whole.

self-stabilization, the ability to return to a stable state after a change in configuration;

self-healing, the ability to recover from external damage or internal errors;

self-organization, the ability to organize component parts and processes toward a goal;

An autonomic computer system is typically envisioned as having autonomic components (ACs), which are at least partly self-managing. An example of an AC is bootstrapping. Bootstrapping is the process by which a computer configures and initiates various processes during start-up. After a user turns on the computer, the bootstrapping process is self-managed. It proceeds through a self-diagnostic check and then activates various hardware and software components.

There are two basic models for autonomic computer design: a feedback control system and a multi-agent system. In a feedback control system, changing conditions provide feedback to the system that triggers changes in the system's function. Feedback control is often found in biological systems. In the autonomic nervous system, for example, levels of various neurotransmitters are linked to feedback systems that activate or deactivate ACs. A multi-agent system uses the collective functions of separate components to complete higher-order functions. For instance, groups of computers can be networked such that by performing individual functions, the components can collectively manage the system's functions and resources with reduced need for outside input. Linking multiple processors together changes the system's resource distribution, requiring that it be able to locate computing resources within all connected agents in order to handle tasks effectively.

Semi-autonomic software and hardware systems are commonly used. Peer-to-peer (P2P) systems for social networking and communication generally have some autonomic properties, including self-configuration, self-tuning, and self-organization. These systems can determine a user's particular computer setup, tune themselves to function in various environments, and self-organize in response to changing data or configuration. Most modern computing systems contain ACs but are not considered fully autonomic, as they still require some external management.

THE PROMISE OF AUTONOMIC SYSTEMS

The main goal of autonomic computing is to enable computer systems to perform basic maintenance and optimization tasks on their own. Maximizing the number of automated functions that a computer can handle allows engineers and system administrators to focus on other activities. It also enhances ease of operation, especially for those less adept at data management or system maintenance. For instance, the bootstrapping system and the self-regulatory systems that detect and correct errors have made computing more friendly for the average user.

Autonomic computer systems are particularly important in robotics, artificial intelligence (AI), and machine learning. These fields seek to design machines that can work unaided after initial setup and programming. The science of autonomic computing is still in its infancy, but it has been greatly enhanced by advancements in processing power and dynamic computer networking. For instance, the AI system Amelia, developed by former IT specialist Chetan Dube, not only responds to verbal queries and answers questions but can also learn by listening to human operators answer questions that it cannot answer. To some, systems that can learn and alter their own programming are the ultimate goal of autonomic design.