Architecture software is a category of specialized computer software intended for use by architects. Through the use of such software, architects may design, model, and modify plans for homes or other buildings digitally rather than on paper. As the type and scale of the structures being designed vary greatly, many types of architecture software are available to address the differing requirements of individual projects.

THE INTRODUCTION OF SOFTWARE TO ARCHITECTURE 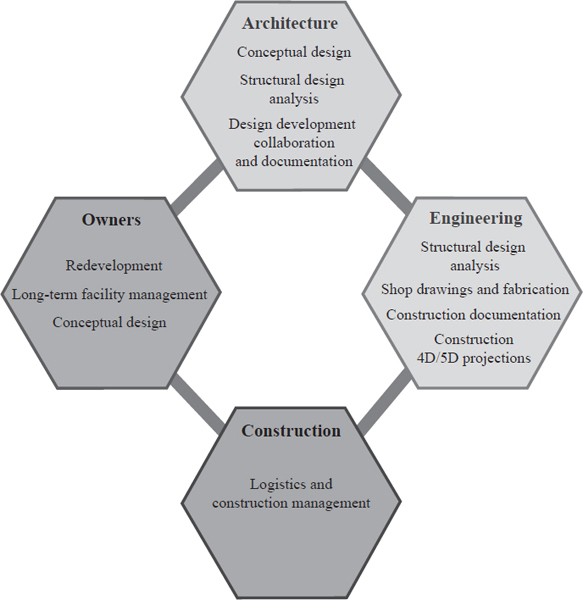 Architecture software is designed to assist in one or more of the many tasks required for building information modeling (BIM). Depending on one's role and how one relates to the building process, certain tasks may be more important. Determining the proper architecture software first requires one to know what BIM tasks one hopes to take on.
EBSCO illustration.

Although typically designed for and marketed to architects, architecture software is similar in many ways to other types of software used in the broader field of art and design. Some architecture programs are essentially specialized versions of computer-aided design (CAD) software. CAD programs are typically used in fields such as manufacturing. For example, one particularly popular architecture program, AutoCAD Architecture, is sold by the software company Autodesk. Autodesk is known for its CAD and computer-aided manufacturing (CAM) programs. Architects began to adopt the use of CAD programs in the 1980s. By the following decade, such software was widely used in the field.

Architecture software is created and sold by a number of different technology companies. Therefore, the available programs vary in terms of features, although there are certain common ones. The first and perhaps most essential feature is the ability to draft floor plans, a process that was historically done with paper and pencil. Architecture software also typically allows users to create 3-D models of structures and easily insert elements such as doors and windows. Unlike physical models of proposed structures, digital models can be modified with just a few clicks of a mouse. Architecture software also sometimes includes features that support collaboration among architects and other professionals. These can include the ability to check files in and out, add notes to floor plans, and record measurements.

Specialized software devoted to building information modeling (BIM) has much in common with standard architecture software. However, BIM also allows the user to incorporate information such as expected time frames, costs, and the functions of a particular building or facility into the design. BIM allows the various professionals involved in the design process to evaluate and modify the design prior to moving forward with the project.

In addition to creating floor plans and 3-D models, architects are frequently tasked with creating images of their designs for clients. Transforming a 3-D model into a 2-D image is known as rendering. In postproduction, an architect may use graphic design software to add visual effects to the rendered image. For instance, if the architect has designed a waterfront apartment complex, he or she may use a graphic design program such as Adobe Photoshop to add photorealistic water textures to the image and increase its aesthetic appeal.

When creating floor plans and models, architects typically use vector images. Vector images are based on defined points and lines. This allows the images to remain true to scale no matter how much their overall size is modified. Graphic design software such as Photoshop, on the other hand, is a raster-based program. In a raster-based program, the images are based on individual pixels. As such, architects also sometimes use software capable of converting from vector to raster.

The use of specialized software in the field of architecture has a number of advantages and disadvantages. Chief among the advantages is a potential increase in productivity and time savings. Digital tools to draft floor plans and create models have largely replaced more time-consuming physical methods. The abilities to modify designs, test designs through digital modeling, and easily collaborate with fellow professionals on a project are cited as key benefits of architecture software.

However, the use of architecture software is not a substitute for architectural training. Some architects argue that the availability of such software can enable some users to produce substandard work. In addition, ongoing changes in the field require architects to maintain up-to-date knowledge of current technology. This can put architects accustomed to working with older systems at a disadvantage.