Applied linguistics is a linguistics subfield that focuses on solving the linguistics problems of daily life. Areas of interest include language learning, language preservation, and automated linguistic tools. Applied and computational linguistics overlap in the design of algorithms and computer programs for educational and commercial applications.

DEVELOPMENT OF THE FIELD 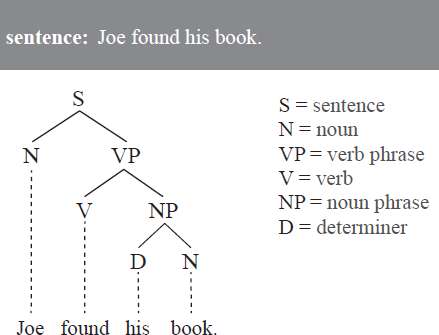 A parse tree, also known as a “syntax tree,” shows the grammatical structure of a sentence. In the example sentence (S), “Joe found his book,” there are two nouns (N), “Joe” and “book.” Based on the verb “found,” we can determine that “his book” is part of the predicate, and the subject—the noun doing the finding— is “Joe.” Determiners (D) are used to distinguish the specific noun about which the sentence is talking. These parse trees are used as a basis for developing computer programs that can identify grammatical structure and draw meaning from a sentence in the same way human brains do.
EBSCO illustration.

Computational linguistics focuses on both applied and theoretical research. It grew out of military efforts in the 1950s to use computers to translate foreign languages, particularly Russian. Computers were widely used in linguistics research by the late 1980s. In the 1990s and 2000s, web-based linguistic applications began to become common.

One major area of linguistics research is linguistic analysis, which seeks to dissect natural languages into their component parts to better understand how languages function and change. Each language can be analyzed in terms of its lexicon. This is the total vocabulary available in a certain language or subset of a language. The term can also refer to an individual's total vocabulary. To understand a language, its specific lexicon must be broken into smaller units. Linguists may study the morphology of words (the specific pattern of characters and phonemes that make up each word). They may also study a language's semantics (how words and phrases relate to what they represent). Beyond semantics is syntax, which looks at how words and phrases are arranged to form sentences and other higher-order units of language. In the digital age, linguistic analysis increasingly relies on software that can compile and evaluate properties of language.

Automated translation is among the best-known examples of applied computational linguistics. Web-based services such as Babelfish and Google Translate use algorithms to analyze user-provided words and sentences and translate the semantic concepts into equivalent expressions in other languages. Computer scientists and linguists are working to refine such software to provide more accurate translations. Applied linguistics has also resulted in the development of software systems that allow users to “speak” to automated systems. Apple's iOS assistant Siri is an example of a program that can analyze the syntax and semantics of a spoken prompt and respond in kind.

Applied computational linguistics also seeks to create tools that can search through text and written data. Computer scientists and linguistics specialists have developed software that can use programmed linguistic rules and structural cues to locate keywords, sentences, and other elements within text. Basic keyword searches are one type of computational linguistic search tool. Computer scientists are working on new search tools that will allow more complex searches and meta-searches within text data. Given the wealth of textual data online, better text search and analysis tools could have a major impact on the future of education.