The American Standard Code for Information Interchange (ASCII) is a character encoding system. It enables computers and other electronic communication devices to store, process, transmit, print, and display text and other graphic characters. Initially published in 1963, ASCII formed the basis for several other character encoding systems developed for use with PCs and the Internet.

Originally designed for use with Samuel Morse's telegraph system, Morse code was one of the first character encoding schemes adopted for widespread use. Telegraphs transmit information by sending electronic pulses over telegraph wires. Morse code assigns each character to a unique combination of short and long pulses. For example, the letter A was assigned to the combination of one short followed by one long pulse, while the letter T was assigned to a single long pulse. Using Morse code, a telegraph operator can send messages by transmitting a sequence of pulses. The sequence, or string, of pulses represents the characters that comprise the message text.

The ASCII standard is based on English. It encodes 128 characters into integer values from 0 to 127. Thirty-three of the characters are control characters, and ninety-five are printable characters that include the upper- and lowercase letters from A to Z, the numbers zero to nine, punctuation marks, and a blank space. For example, the letter A is encoded as 65 and a comma as 44.

The encoded integers are then converted to bits, the smallest unit of data that can be stored by a computer system. A single bit can have a value of either zero or one. In order to store integers larger than one, additional bits must be used. The number of bits used to store a value is called the bit width. ASCII specifies a bit width of seven. For example, in ASCII, the integer value 65 is stored using seven bits, which can be represented as the bit string 1000001. 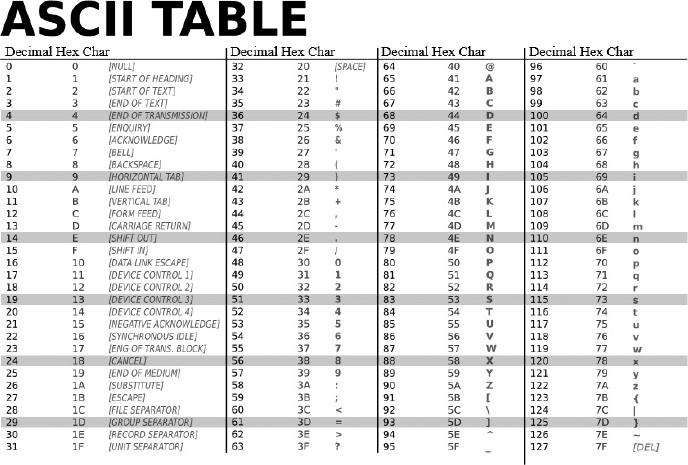 This chart presents the decimal and hexadecimal ASCII codes for common characters on a keyboard.
Public domain, via Wikimedia Commons
SAMPLE PROBLEM

ASCII defines the integer values for the first eleven lowercase letters of the alphabet as follows:

Using this information, translate the word hijack to the correct ASCII integer values.

The ASCII representation of the word hijack can be determined by comparing each character in the word to its defined decimal value as follows: